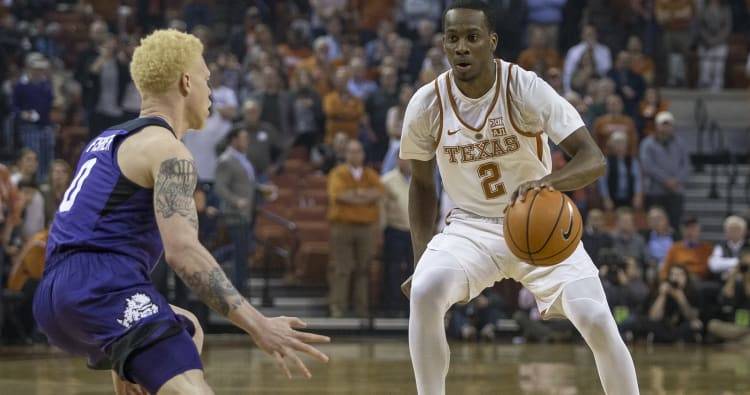 On an emotionally charged day inside Cooley Pavilion, the Longhorns had to dig deep against No. 16 TCU. Having four freshmen in the starting lineup probably left coach Shaka Smart saying an extra prayer, too.

Playing without Andrew Jones and Kerwin Roach Jr., Texas had only seven active players and had to hold on tight all the way through double overtime. Jericho Sims hit one free throw with 5.6 seconds remaining, and the Horns watched TCU’s Jaylen Fisher miss a layup at the buzzer.

Texas escaped with a 99-98 win that capped a draining day and left Smart in tears. Sophomore Eric Davis Jr. had a season-high 22 points, which also tied his career high. Dylan Osetkowski hit six free throws in the two extra periods and finished with 20.

This was all set up with a wild finish in the first overtime period.

With TCU leading by one, Mo Bamba came across the lane and blocked Alex Robinson’s layup attempt with 31 seconds left in overtime. The Horns gobbled up the loose ball and called timeout with 25.4 ticks remaining.

After the timeout, Davis drove the lane and kicked to a wide-open Osetkowski in the left corner. He drained a 3-pointer with 8.6 seconds remaining from the same corner that he shot one to beat Virginia Commonwealth.

But the Frogs had one more chance. Vladimir Brodziansky swished a 16-footer just as time expired to force double OT.

Shaka Smart admitted over the weekend he was going to spend some long hours with point guard Matt Coleman. All those talks must’ve worked. Coleman was simply terrific in the first half directing traffic and dropping dimes. He had eight assists in the first half alone, several coming on alley-oop passes to Jericho Sims.

With about five minutes remaining, Coleman crossed the threshold with his 10th assist of the night. He finished with 17 points and 12 assists for his first career double-double at Texas.

The Texas basketball family, UT fan base and those around the Big 12 basketball community unleashed an outpouring of support for sophomore Andrew Jones. News broke earlier in the day that Jones has been diagnosed with leukemia. No other information about his prognosis was given, and the family cited a need for privacy.

The Longhorns wore a special “AJ1” patch on their jerseys. Several fans also had signs supporting Jones, a 6-foot-4 guard from Irving MacArthur who was the team’s leading scorer early in non-conference play.

It was a day full of all kinds of bad news for the Horns. It was announced that guard Kerwin Roach Jr. is now out indefinitely with a fractured left hand injury. Roach had it wrapped up during practice last week, and he played 33 minutes against Saturday against Baylor. But Roach could miss the rest of January with the injury to his non-shooting hand.

The Longhorns’ half-court offense struggled in a bad way down the stretch last Saturday against Baylor. They didn’t score a single point in the last 5:03. The Horns came out on fire against the Horned Frogs, though. Texas started the game 7 for 8 shooting as six players got in the scoring column early. The Horns finished the half shooting a shooting a red-hot 63 percent despite going 4 for 11 from 3-point range and had a 43-33 halftime lead.

On Saturday, Texas has a chance at another winnable road game at Oklahoma State. Under first-year coach Michael Boynton, OSU (11-4) was 1-2 in league play going into Wednesday’s game against Kansas State. Both teams seem evenly matched on paper. Both are struggling from 3-point range, but the Longhorns play far more consistent defense.