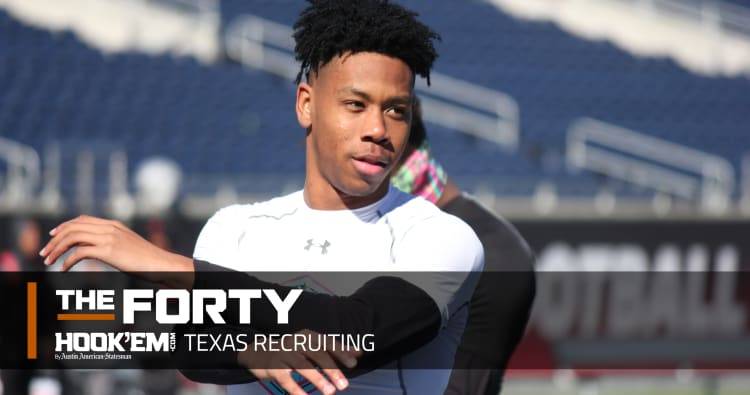 The date is yet to be set, but at least one elite wide receiver will be at Texas’ junior day. A junior day is an important date for college recruiting, as coaching staffs gather a bulk of the school’s targets together on campus to highlight the direction of the program.

BJ Foster and some 2018 commits credit the 2017 junior day as the catalyst for the success in their class. To land the top players in the state in 2018, Texas needed to focus on defensive backs. For the 2019 cycle, the state’s elite position is wide receiver.

Upwards of 10 in-state receivers will be represented on the 2019 Fabulous 55 when it’s released after national signing day in February. It’s a loaded position and a group of those prospects attended the Future 50 Camp in Orlando last week.

The star of the day was Jordan Whittington, a 4-star wide receiver out of Cuero. Whittington was originally scheduled to commit during his junior season on his birthday, but decided to push that date back and take more time for the process.

“It wasn’t that hard once I knew about the coaching changes that were going to happen,” Whittington said in Orlando. “I wanted to know what the coaching staffs at each school was going to look like after this season. I am for sure going to commit before next football season. I just don’t want to be one of those guys who de-commits.”

Whittington listed Texas among his favorites alongside UCLA, Florida, Ohio State, Texas A&M and Ohio State. He said he is “definitely” attending Texas’ junior day and hopes to make it to more, specifically Ohio State’s because he’s yet to visit that campus.

“The key for me is to continue making relationships with the coaches,” Whittington said. “At Texas, I talk mostly to coach Mehringer and he says I’ll play early because they’re lacking at that position.”

He also sees Texas’ 2018 class as an advantage for him as a player.

“Texas’ defensive back class opened my eyes because I’d be going up against them every day,” he said. “We all want to play with great players because the goal is to win a national championship.”

Texas won most of its recruiting battles in Houston or out of state. Only Frisco Wakeland’s Rafiti Ghirmai and Fort Worth Eastern Hills’ Byron Hobbs could be considered Dallas-Fort Worth prospects for 2018 that signed with Texas in the early period. Herman’s base is Houston and he won’t shy away from the area, but he’ll need to win in DFW to truly take control of the state.

Allen High School is one of the places where recruiting battles take place. Theo Wease Jr., a 5-star wide receiver, is the top-rated 2019 prospect at Allen and the Longhorns are among the programs that have extended the 6-3 prospect an offer.

“I see a lot of potential at Texas,” Wease said at the Future 50 Camp. “As soon as they get the offensive line cleaned up, they can compete for championships. As players in the 2019 class, we definitely saw the momentum in the 2018 class and got curious.”

Wease plans to take advantage of the 2019 class’ ability to take official visits in the spring. Allen is typically deep in a playoff run and if Wease wants to sign early he could potentially play a state title game the same week of national signing day in December.

“I’m going to take advantage of spring visits because the season gets busy,” he said. “I still need to figure out where I’m taking those visits.”