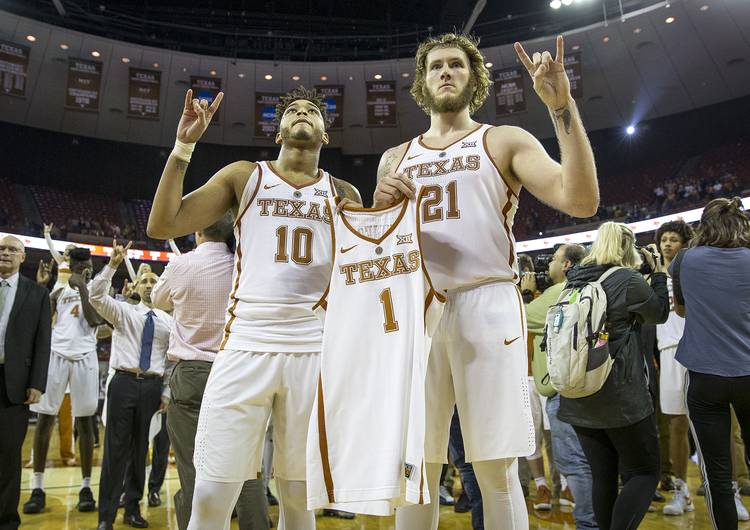 There’s no playbook for this. No manuals are given out at coaching schools that detail how coaches should handle players with a life-threatening illness.

Texas coach Shaka Smart is now navigating his program, and by extension the UT fan base, through uncharted waters.

Days of testing revealed that sophomore guard Andrew Jones has leukemia. That was difficult enough. Explaining it to the rest of the team and then the whole world was one of the toughest assignments imaginable.

“We had a meeting last night over in the dorm, and at that point we told our guys what the diagnosis was,” Smart said late Wednesday, after Texas’ 99-98 emotional double-overtime win over 16th-ranked TCU. “Leaving that meeting, we had guys that weren’t just in tears. They were wailing.

“We didn’t really know what was going to happen today.”

At 11:15 a.m. Wednesday, the university released a statement from the Jones family that Andrew, a charismatic sophomore from Irving MacArthur, had been diagnosed with leukemia. He’s already begun treatment; the family has requested privacy at this time.

When the news broke, it triggered a tidal wave of positive thoughts from the entire Texas basketball family, UT and Big 12 community. Even Gov. Greg Abbott tweeted, “We extend our prayers & support to University of Texas guard Andrew Jones who has been diagnosed with leukemia. #HookEm.”

This all happened hours before an 8 p.m. game against the nationally ranked Horned Frogs at the Erwin Center. Using only seven players, the Longhorns somehow dug deep and emerged with the win — in double-overtime, no less.

Asked to describe the day, junior forward Dylan Osetkowski said, “I think an emotional roller-coaster. I think everybody left everything they could on the line tonight for one reason.”

“He was just with us,” Davis said, “and he’s fighting a different battle.”

Texas officials are sensitive to the family’s wishes, so no information was provided about the type of leukemia Jones has or what his long-term prognosis might be.

“We will share things only as his family deems appropriate,” Smart said. “Obviously in situations like these, we are always going to defer to mom, dad and the family.

“He’s fortunate. He’s got a really good support system around him,” Smart added. “What we need to do as a program and athletic department is support that family.”

Equipment manager Rob Lazare spent the day scrambling to find a local screen printer to get jersey patches made before tipoff. The Horns wore a burnt orange-and-white “AJ1” patch against the Frogs. When the game was over, Osetkowski and Davis held up Jones’ No. 1 jersey.

“Man, what a tough day,” Texas legend T.J. Ford said in a video posted on social media. “Andrew Jones, I’m praying for you. It’s tough for me right now just knowing you personally and spending a lot of time with you, mentoring you. We’ve got to continue to fight. This is a time for us as Longhorn nation to come together and be supportive for you.”

Former Texas guard Javan Felix tweeted that all UT fans should support Jones. “Say a prayer for him and his family it could simply put a smile on their face in a tough time like this,” he tweeted.

The Kansas and Baylor basketball programs both tweeted out messages of support, as did Kentucky. “May he stay strong through this difficult time and we are eager to see him back on the court soon,” the Jayhawks said.

West Virginia coach Bob Huggins posted a long message on his Twitter account. The Jones news “brings sadness to not only myself but my staff and all of the West Virginia men’s basketball program.”

“Basketball is just a game — family, blood or not, overshadows everything,” Huggins wrote.

The victory over TCU was more than just one game, one win. It released the pressure that had been building inside the program for days, ever since Jones first felt fatigued for unexplained reasons when he returned from the Christmas break. Jaylen Fisher missed a potential game-winning layup just before the buzzer, and Smart was pumping both fists with joy and was nearly brought to tears.

“We said it in the huddle every time out. We’re going to win this game, no matter what,” point guard Matt Coleman said. “We’re going to find a way.”

The Longhorns (11-5, 2-2 Big 12) will have tougher games ahead without their dangerous sharp-shooter who was averaging 13.5 points per game.

All of Jones’ future plans are now on hold. It’s unclear whether Jones will return to school for the spring semester or even play college basketball again. This was someone who had NBA aspirations after a standout freshman campaign.

Now, Jones is engaged in a battle far greater than a basketball game.

“I think our guys did a phenomenal job of coming together tonight and fighting,” Smart said. “But to be honest with you, it’s a whole different level when you’re talking about battling a very, very serious illness. That’s why we really, really need everyone’s thought and prayers and support.

“Andrew doesn’t just need that now over the next few days and weeks. He needs that over time, over the long haul.”