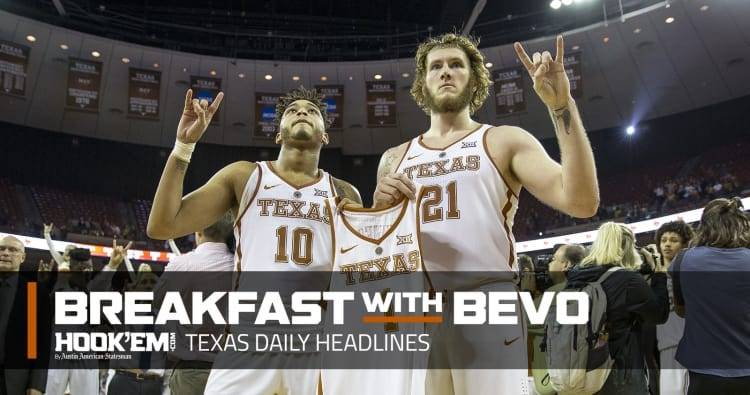 The Longhorns family was shocked and saddened Wednesday when news broke that Texas sophomore guard Andrew Jones was battling leukemia. The University and the Jones’ family announced the heartbreaking news in a statement. Coach Shaka Smart had eluded to an illness that was keeping the scoring leader off the court in previous talks with the media. It’s clear now why the guard was having trouble returning to the court despite having healed up from his wrist injury. Jones has started undergoing treatment for the illness, according to the statement released by his family. He was offered support on social media by those around UT sports and the Big 12. Even the governor of Texas offered up prayers for Jones.

Texas capped an emotional day with a thrilling 99-98 double overtime win over TCU Wednesday night. The Longhorns started out hot as they hosted No. 16 TCU with a lot on their minds. The Horned Frogs caught up and eventually took the lead, but Texas kept fighting back. At halftime on ESPNU, Smart talked about his players playing for each other, and specified that he meant every member of the team. That made it clear that the Texas basketball team had Andrew Jones at the forefront of their thoughts. They wore a temporary patch in honor of their teammate. Proud of the way his team battled, Smart said Jones is the best fighter on the team, and the team fed off that.

Del Conte: ‘Texas needs to get back to being Texas’

New athletic director Chris Del Conte has made it a point to embed himself into UT’s culture in every way, according to Texas beat writer Brian Davis. He’s available to athletes, having provided them with his cell phone number. Del Conte makes the point that if the university does as it should, it’ll be fine. In addition to granting access to athletes, he’ll even engage with the fan base on Twitter at times.

Jordan Whittington and Theo Wease Jr. will be targets for the 2019 class for Texas. Whittington, a 4-star receiver out of Cuero, plans to attend Texas’ junior day, according to Hookem.com recruiting writer Mike Craven. Junior day was instrumental in the Longhorns landing top defensive backs in their 2018 class. They’ll have to focus on receivers this time around. Wease Jr. is one such receiver as the top-rated prospect for 2019. He’ll look to take advantage of the 2019’s class ability to take official visits in the spring. He’s yet to decide where to take those visits.

Sam Ehlinger for Heisman? Early odds give Texas QB a chance in 2018