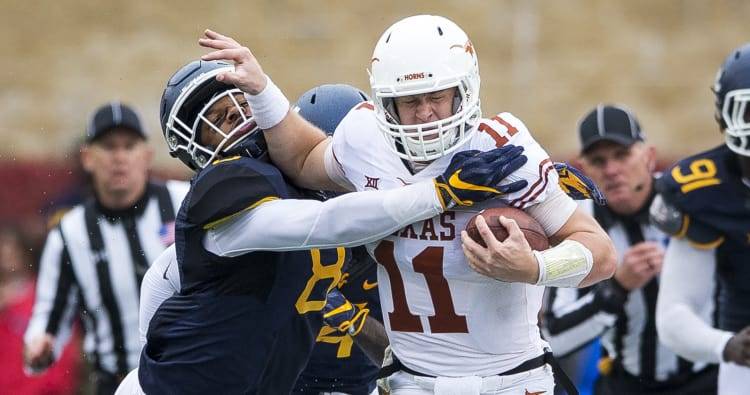 Texas coach Tom Herman may not name a starting quarterback until Week 1, but the folks setting the betting lines have already pegged one of the Longhorns quarterbacks as a Heisman Trophy contender.

Sam Ehlinger is a 25-to-1 favorite to take home the top honor in college football in 2018, according to the folks over at Sports Betting Dime.

The rising sophomore from Westlake is tied for the 10th-best odds according to the site, which has Georgia quarterback Jake Fromm as the early favorite at 10-to-1. Oklahoma quarterback Kyler Murray received 35-to-1 odds to keep the trophy in Norman.

Ehlinger flashed at times in his freshman season, throwing for 1,915 yards, 11 touchdowns, 7 interceptions and rushing for 385 yards in six starts and nine appearances. He burst onto the national scene in Week 3 when he led the Longhorns 91 yards for a go-ahead touchdown in the final minute against No. 4-ranked USC.

Untimely turnovers became a theme, however, starting with a fumble in overtime of that same game against the Trojans. Late interceptions led to losses against Oklahoma State and Texas Tech.

RELATED: What are the odds? According to Vegas, Shane Buechele is a Heisman hopeful

This time last year, Buechele was receiving the same type of hype as a Heisman hopeful, receiving 35-to-1 odds from Bovada.

Texas fans would likely settle for a 2,500-yard passer and nine or 10 wins no matter who wins the job.

The post Sam Ehlinger for Heisman? Early odds give Texas QB a chance in 2018 appeared first on Hook ‘Em.

Texas’ 2018 early enrollees are ready to make an immediate impact