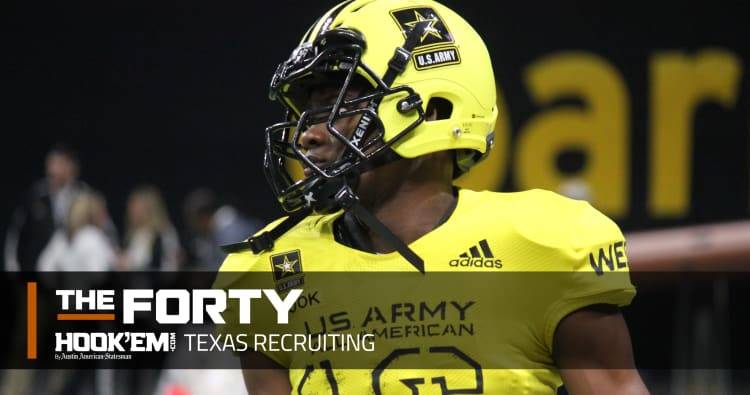 The Longhorns signed 19 prospects during the early signing period. Nine of them are expected to enroll early and begin their college careers next week when UT’s spring semester begins. It gives the players the bonus of more practice time before their freshman season. It also allows coaches to apply those scholarships backwards to the 2017 class, providing Tom Herman and his staff a chance to sign more than 25 players for 2018.

Quarterbacks Cameron Rising and Casey Thompson will be on campus to provide depth in the quarterback room and push for playing time. JUCO tackle Mikey Grandy should help fill the void left by Connor Williams, while Brennan Eagles, a 4-star wide receiver, will add another big body to the wide receivers group.

Five other early enrollees are on defense. Linebacker Ayodele Adeoye said he’ll compete with Anthony Wheeler for Malik Jefferson’s vacated spot at linebacker. Safeties BJ Foster and Caden Sterns will work to replace DeShon Elliott, while Anthony Cook will get a shot to fill the shoes of Holton Hill.

The ninth early enrollee is punter Ryan Bujcevski, who will be tasked with replacing his cousin, and Ray Guy Award winner, Michael Dickson.

All nine will get a chance to compete for playing time early. Bujcevski is likely to be the punter on opening day, so we’ll leave him out of the following list. Here are the five early enrollees most likely to make an impact as freshmen:

The early departure of DeShon Elliott cleared room for Foster to make an immediate impact at safety. The prep running back is considered the best safety prospect in the nation because of his range and hard-nosed hitting ability. He showed off both during the Under Armour All-America Game in Orlando, Fla., on Jan. 4, causing a fumble on the opening drive.

Cook hails from Houston Lamar and it’ll be up to him to replace the production of Hill, himself a Lamar product, who was suspended by Texas before declaring for the NFL draft following his junior season. Cook won’t be gifted a job and the Longhorns are set on one side with Kris Boyd. Cook should be in contention for the starting spot opposite Boyd and will get an early shot to impress the coaches this spring.

All Sterns does is make plays. As a junior, he helped lead his high school to the Class 6A Division II state championship game. He concluded his career with an MVP performance last weekend at the U.S. Army All-American Bowl. He recorded 2 interceptions in the game and was always around the football. Sterns can play safety or cornerback and likely will get a chance at both in the spring. That versatility will allow him on the field early in his career.

Texas’ biggest need in the 2018 class was offensive line. The Longhorns secured the signatures of four tackle prospects during the early signing period, but it’s Grandy that the staff is counting on to contribute in a big way. The JUCO product chose the Longhorns over UCLA and will be asked to immediately compete for the starting spot at left tackle. He’s also capable of playing guard.

The linebacker position improved mightily in 2017, a combination of the added presence of defensive coordinator Todd Orlando, JUCO transfer Gary Johnson and the improved play of former 5-star recruit Malik Jefferson. The improvement from Jefferson earned him the ability to declare early for the draft, leaving a hole in the middle of the Texas defense. Orlando wants the most physical player on his team to play middle linebacker and Adeoye plays with a mean-streak. He’s an old-school linebacker who can go sideline to sideline, which may give him the advantage over Wheeler.

Sam Ehlinger for Heisman? Early odds give Texas QB a chance in 2018

Mike Krzyzewski: ‘Basketball gods’ were on Texas’ side in win over TCU