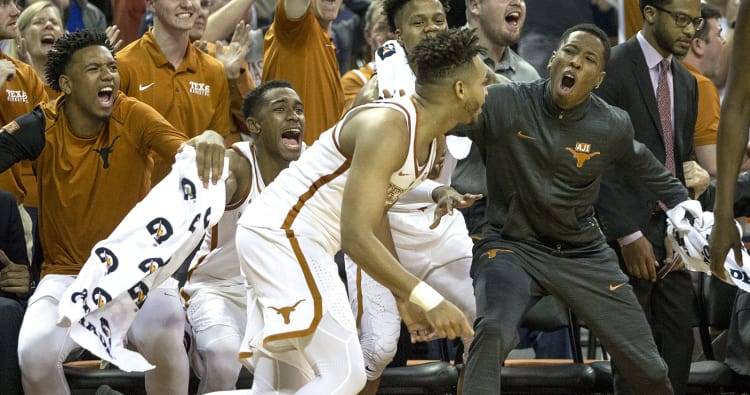 Texas players would’ve gone all night if that’s what it took against 16th-ranked TCU.

“We just wanted to get out with a win,” junior forward Dylan Osetkowski said. “Forty-nine minutes, 55 minutes, it didn’t matter.”

Wednesday had to be an emotional roller-coaster. First came the news that Andrew Jones had been diagnosed with leukemia. Then, it was learned guard Kerwin Roach Jr. would likely miss two weeks with a fractured hand.

The Longhorns used only seven players against the Horned Frogs, but every one of them contributed in a thrilling 99-98 double-overtime victory.

Jericho Sims hit one free throw with 5.6 seconds left. But then Sims could only watch as TCU’s Jaylen Fisher blew by him and attempt a game-winning layup. Fisher, a 50-percent shooter, simply missed it. The Longhorns (11-5, 2-2 Big 12) escaped knowing they had collected a critical victory with everything stacked against them.

“We got some real help from someone when that ball didn’t go in,” coach Shaka Smart said.

Asked what he thought as Fisher raced toward the goal, Sims said, “Man. I’m glad that it didn’t go in.”

Eric Davis Jr. had a career-high 22 points by hitting 4 of 9 3-pointers. None were bigger than his fadeaway from the right corner in regulation. He swished a high, arcing shot that gave Texas a 77-73 lead with 1:07 remaining. TCU didn’t flinch. Vladimir Brodziansky hit two free throws and scored again to force overtime.

In the extra period, Davis drove and kicked the ball to Osetkowski in the left corner. He buried a 3-pointer with 7.8 seconds left that gave the Horns an 88-86 lead. It was similar to the game-clinching trey Osetkowski drilled against Virginia Commonwealth and the highlight of his 20-point night.

The Frogs then took a four-point lead on Brodziansky’s layup, but Davis and Osetkowski combined to tie it up again. It went back and forth until TCU’s Desmond Bane missed a jumper with 10 seconds left.

Smart spent the days leading up to the TCU game showing players film from last year’s matchup. Over and over again, the film clip showed TCU veteran Kenrich Williams hustling after rebounds and gobbling up everything in sight. One play showed Williams beating Davis to a 50-50 ball.

The same situation happened again after Bane’s miss. Only this time, Davis beat Williams to the ball and got it to Sims, who was fouled while holding onto it for dear life. “I didn’t want a repeat of last year,” Davis said. “It was a crucial moment. That’s what the team needed me to do.”

Sims, a 39.3 percent free throw shooter, made the first and gave the Horns the lead. “For him to make one out of two, we’ll take that,” Smart said with a laugh.

It was a far cry from the rest of his night, leaping through the air and throwing down alley-oop dunks. Sims had 14 points and six boards. He played 41 minutes while Mo Bamba (10 points, nine rebounds) had to sit for stretches because of foul issues. “I think overall tonight, you got a glimpse of what Jericho is going to be,” Smart said.

Guard Matt Coleman played his best game as a Longhorn, scoring 17 points and dishing out 12 assists for his first career double-double. Jase Febres and Jacob Young both scored eight each as both hit clutch 3-pointers. “That’s the guy we recruited,” Smart said.

Overall, Texas shot a sizzling 56.7 percent from the floor despite turning it over 18 times. The Horns simply wouldn’t be denied. Not on this day, anyway.

“It was definitely a good win,” Davis said. “We’ve got to keep it going now.”