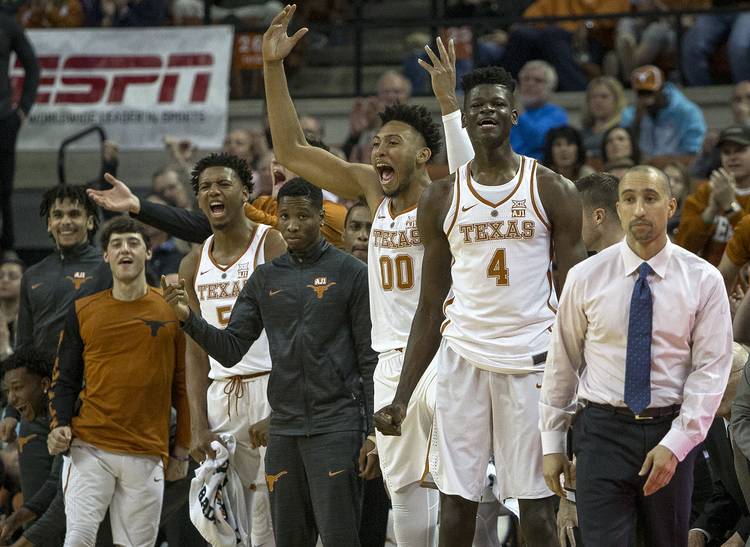 From the moment Shaka Smart arrived at Texas, he’s preached one major theme to his Longhorns: Do your job.

Don’t worry about what this player is doing, what that opponent did or what the official called. Just do your job. All successful coaches and companies follow a similar thesis. If everyone focuses on their specific tasks, the team will succeed.

It’s been an emotional week, to be sure. The Horns learned about Andrew Jones’ leukemia diagnosis on Tuesday and then rode that energy to a double-overtime win over No. 16 TCU the next day. Now they must reload for Saturday’s trip to Oklahoma State.

The Cowboys (11-5, 1-3 Big 12) have won 14 straight home games against unranked opponents. First-year coach Mike Boynton has pumped life into Gallagher-Iba Arena, and guard Jeffrey Carroll is one of the top 10 scorers in the Big 12.

“We don’t need Jericho Sims to play point guard,” Smart said. “We don’t need Mo Bamba to make 10 threes a game. But we need all of our guys to try on a daily basis to just give their best to their teammates and their team. On the nights when we have that, we’ll give ourselves a really good chance to win.”

The Longhorns (11-5, 2-2) likely will use only seven players again, same as they did in the win over the Horned Frogs. In addition to Jones’ absence, UT will continue to be without Kerwin Roach Jr., who has a fractured left hand.

Roach first experienced some pain weeks ago but played through it. His performance dropped off against Iowa State, and he could barely dribble with his left hand against Baylor, Smart said. Roach is expected to have another X-ray next week.

“The theory is that it was something that was so small that it didn’t show up, and it got worse because he got hit or whatever,” Smart said. “I would say (he’ll be out) probably a couple of weeks. But a lot of it depends on how fast he heals.”

With Roach out of the lineup, the Horns started four freshmen against the Frogs. Guard Matt Coleman and Bamba have been lineup mainstays. Guard Jase Febres, who is emerging as a possible 3-point threat, played shooting guard — the spot normally held by Jones. Sims stepped in alongside Bamba and junior Dylan Osetkowski.

“Another man down. We had to step up,” guard Eric Davis Jr. said of the team’s mentality.

Jones’ absence overshadowed just about everything on Wednesday, and rightfully so. But there were some dynamic individual performances.

Davis had a career-high 22 points. He’s finished in double figures in three of the last four games. Coleman played arguably his best game as a Longhorn with 10 points and 12 assists, two shy of the UT freshman record. Several of those came via alley-oop passes to Sims for dunks. Sims had a breakout performance with 14 points and six rebounds.

All of this happened with Bamba slowed by foul trouble. He had 10 points and nine rebounds but still must learn how to avoid silly fouls.

It’s arguably that emotion alone carried the Horns against the Frogs. Some divine intervention may have helped. TCU’s Jaylen Fisher just flat-out missed a potential game-winning layup before time expired.

How far can that emotion carry a group of 18- to 22-year-old college athletes? Smart and the Longhorns will certainly find out in Stillwater.

“We have to remember first and foremost that Andrew is the primary consideration in terms of our thoughts and prayers and our hopes for the way things are going to go over these coming weeks,” Smart said. “But we do have basketball games to play.”

The post Emotions aside, the season marches on as Texas heads to Oklahoma State appeared first on Hook ‘Em.