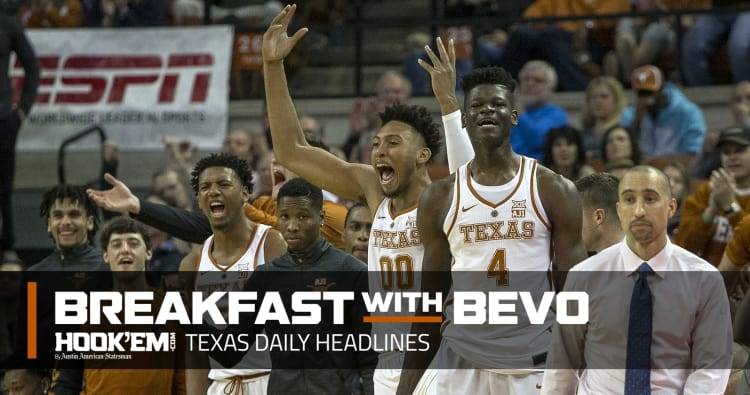 The Longhorns just endured a roller-coaster 24 hours. The Texas men’s basketball team learned on Tuesday night that teammate Andrew Jones was battling leukemia and then had to be ready to compete on Wednesday. Compete they did, defeating TCU 99-98 in a double-overtime thriller. The night before some players were wailing over the news, but they managed to endure the rough day and close it out with a win.

A widely criticized wristband policy that was partly responsible for lower student attendance at UT football games is being ditched next season, Texas beat writer Brian Davis reports. Texas officials have decided to move the student section to the southeast corner of Royal-Memorial Stadium while making all student seating general admission. The Texas band will also set up next to the students. Athletic director Chris Del Conte said the university is moving to a first-come-first-served policy.

The Longhorns will welcome nine early enrollees for spring football practice. Those players will get a jump on their freshman year and Texas can apply their scholarships back to the 2017 class. That let’s Tom Herman sign more than 25 players for 2018, according to Hookem.com recruiting writer Mike Craven. Cameron Rising, Casey Thompson and Brennan Eagles will be among the nine players reporting for action.

Olivia Zelon, who redshirted the 2017 season, has decided to leave the Texas volleyball program. The 5-foot-6 libero from Santa Monica, Calif., came to UT as a member of the top-rated recruiting class in 2017. With Cat McCoy graduating, Texas will have to find someone to fill the roll left by the all-time leader in digs. Likely candidates are Autumn Rounsaville and Claire Hahn.

Mike Krzyzewski: ‘Basketball gods’ were on Texas’ side in win over TCU