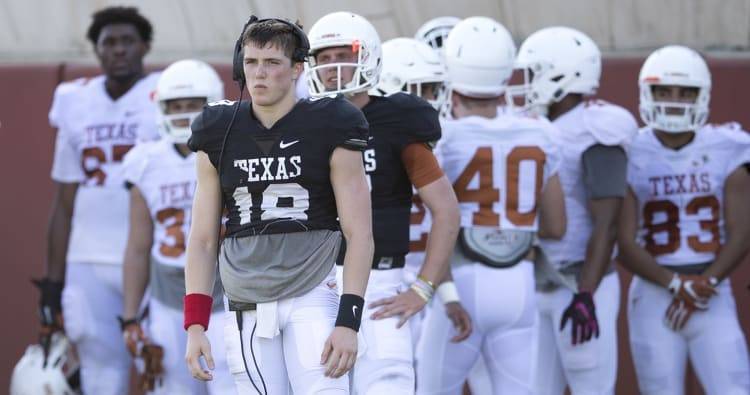 The player who handled the final snap of Texas’ 2017 football season will not be around when the Longhorns kick off their 2018 campaign.

Walk-on quarterback Josh Covey has transferred to Stephen F. Austin, a FCS-level program in Nacogdoches. Rob Davies, who coached Covey at East View High in Georgetown, confirmed the news to the American-Statesman on Friday. Davies said that while Covey enjoyed his time at Texas, he was looking for an opportunity to play.

Davies added that Covey plans to eventually finish up his education on the 40 Acres. Covey, whose father was once a defensive back at Texas, was studying electrical engineering at Texas.

Covey walked onto UT’s football team in 2014 after quarterbacking East View to two playoff appearances. After two years as a wide receiver, he was moved back to the quarterback position by Tom Herman’s coaching staff.

Covey was one of three quarterbacks on UT’s depth chart this past season, although the sophomore was leapfrogged by receiver Jerrod Heard in emergency situations. Covey’s responsibilities included running the scout team and signaling in plays. Covey did not throw a pass last fall, but he executed the kneel-downs in wins over San Jose State and Missouri.

Covey has two years of eligibility remaining. There, however, was not much room left for him at Texas. Shane Buechele will be a junior next season, and Sam Ehlinger just wrapped up his freshman year. Texas signed two quarterbacks last month, and both Cameron Rising and Casey Thompson are expected to be on campus for spring drills.

Emotions aside, the season marches on as Texas heads to Oklahoma State

Social reaction: Texas fans react to news that wristband policy is no more