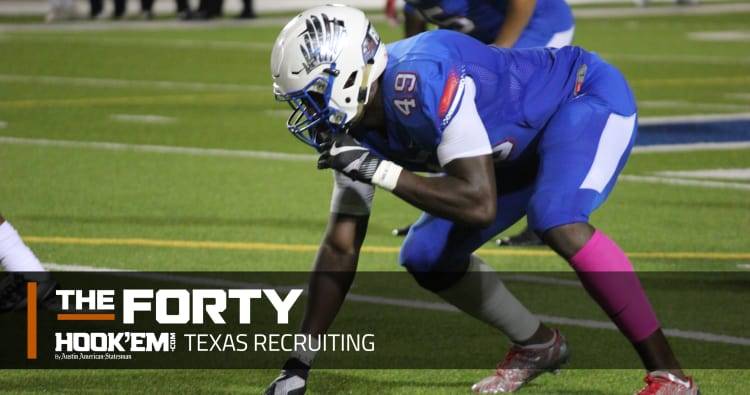 It’s crunch time for the 2018 class and the Longhorns used the first weekend after the end of the dead period to concentrate on their top remaining targets. Tom Herman’s staff didn’t spend time on the road hitting a bunch of schools. Instead, it spent quality time with a select number of recruits like defensive ends Joseph Ossai and Vernon Jackson and wide receivers Joshua Moore and Jaylen Waddle.

Moore was scheduled to take an official visit, but is now expected to take his official visit to Austin this upcoming weekend. The 6-foot wide receiver from Yoakum is a Fabulous 55 member and a one-time Nebraska commit. His twin brother, Jordan, is committed to Texas A&M.

“People think my brother and I are a packaged deal and assume I’ll go to Texas A&M, but that isn’t necessarily the case,” Moore said. “I need to do what is best for me and he chose Texas A&M because he thought that was best for him. It’d be great to keep playing with him, but it won’t be a deciding factor.”

Ossai, a 4-star defensive end from Conroe Oak Ridge, was once considered a Texas A&M lock. The work of Oscar Giles is the main reason the Longhorns are making up ground on the Aggies. The 6-4, 220-pound prospect is now firmly in the mix for Texas.

Two months ago, A&M was securely in the lead. It changed when Kevin Sumlin was replaced and uncertainty began to surround the staff Jimbo Fisher will keep around after national signing day. Giles being securely employed by the Texas staff is helping the Longhorns because Ossai wants familiarity with his position coach upon arrival to college.

In Due Time…. preciate this dope edit brodie @979SportsEditz pic.twitter.com/rCeP2P4hFO

“(Texas) has done a great job recruiting him, especially Giles,” said a source close to Ossai. “He is the biggest reason UT is in this conversation.”

New offer out for 2018 prospect

Texas clearly wants to add a speedster. It tried to add Craig Williams from Crosby before the early national signing period, but the 3-star remained committed to Baylor and signed his national letter of intent. Texas is hoping Jashaun Corbin, a 3-star from Rockledge High School in Florida can fill the void.

Corbin is a 6-foot, 191-pound all-purpose back who received an offer from Texas on Jan. 12. He visited Nebraska over the weekend and plans to take an official visit to Texas A&M on Jan. 26. The Longhorns’ only hope is to get him on campus before signing day on Feb. 7.

God is amazing! Just received an offer from the University of Texas❗️🤘

The pursuit of Corbin isn’t a reflection on the status of Ingram, Texas’ lone running back commitment. The Longhorns see Ingram as a true running back, while a player like Corbin could play on third downs as a running back and help as a slot receiver. He ran for 1,022 yards and recorded 619 yards as a receiver during his junior season.