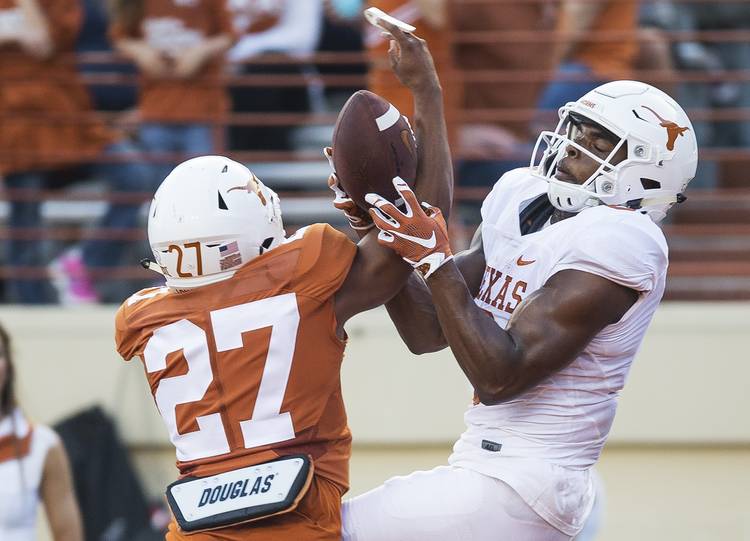 Texas defensive back Donovan Duvernay (27) breaks up a pass intended for his twin brother, Devin, during the Orange-White spring game in Austin on April 21, 2018. NICK WAGNER / AMERICAN-STATESMAN

Next season, Texas’ football team will not have a Duvernay on its roster.

A UT spokesperson has confirmed that backup cornerback Donovan Duvernay has entered the NCAA’s transfer portal. Following Orangebloods.com’s initial scoop, other media outlets reported that Duvernay intends to join another team as a graduate transfer. Duvernay, a Sasche product who is studying corporate communications, was a redshirt junior this fall.

Duvernay joins punter Chris Naggar and offensive lineman J.P. Urquidez among the Longhorns who plan on transferring this offseason with a degree from Texas in hand. All three players were reserves this past season.

Over the past four years at Texas, the 5-9, 185-pound Duvernay appeared in 12 games. His biggest moment may have came in a 41-34 win at Texas Tech in 2018. Due to injuries in the secondary, Duvernay logged significant fourth-quarter minutes during the seven-point win.

Duvernay recorded three tackles and a pass deflection with the Longhorns. One of the eight games he played in as a junior was the 2019 Alamo Bowl.

Duvernay is the twin brother of UT senior receiver Devin Duvernay. With 106 receptions and 1,386 receiving yards, Devin emerged as one of the nation’s top receivers this season. He will likely be selected in this spring’s NFL Draft.