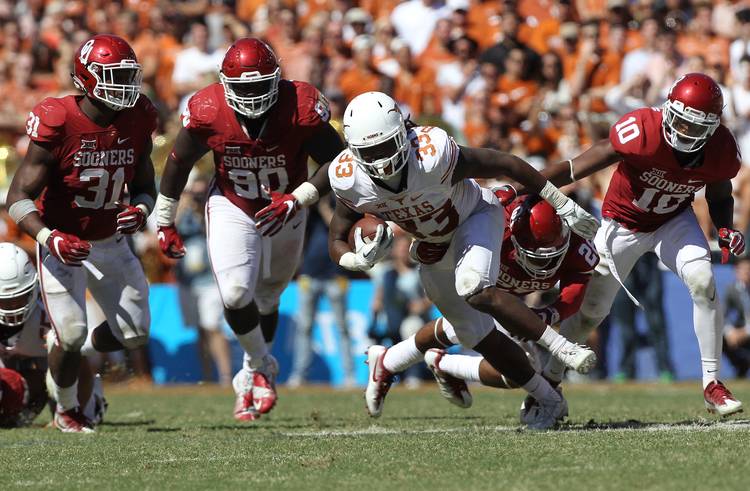 In today’s Golden’s Nuggets, Cedric touches on a couple big Bevo-related items: Here’s what he had to say about Texas running back D’Onta Foreman:

Don’t get too attached to D’Onta Foreman because if he’s smart, he’ll be gone at the end of the season.

That’s an NFL talent in the backfield who’s only going to get better. A running back only has a certain amount of carries in his body and the junior would be well served to start on his first pro contract.

Nearly lost in the disappointment that was Texas-OU was the sheer brutality of the most underrated running back in college football. The deceptively fast Foreman ran through and around the Sooners for 159 yards and two touchdowns. He probably would have gone for 250 if the defense could have gotten off the field more often. Add to that he was playing with a pulled abdominal muscle that was visibly affecting him.

He may be the most respected guy on this team because he brings it every game without fail.

“He’s strong and he has the speed to make yards when he gets out,” said teammate Tyrone Swoopes. “He’s a very talented back. He’s always been determined to make positive plays and for the most part he’s been doing it.”

Foreman, the straw that stirs the drink for that offense, may go down as one of the least appreciated backs to play here because the Horns aren’t winning enough.

For the rest of Cedric’s Nuggets, including his thoughts on whether the 2016 season is a lost cause and where the Dallas Cowboys’ rank in the best NFL teams list, click here.