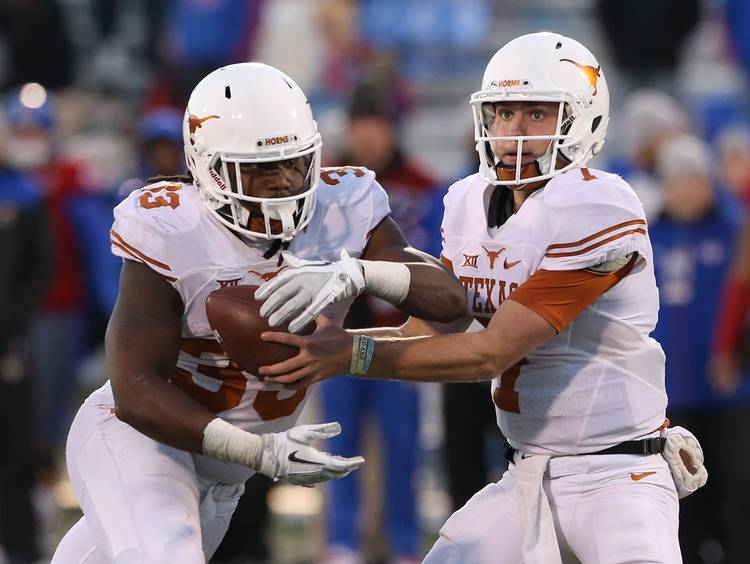 Texas's #33 D'Onta Foreman takes the ball from #7 Shane Buechele during the second half in Lawrence, Kansas on Saturday, November 19, 2016. DEBORAH CANNON / AMERICAN-STATESMAN

So when is 2,000 rushing yards not enough to be considered for the Heisman Trophy? Apparently in 2016.

The list of finalists for the coveted year-end college football trophy was announced Monday night, and Texas junior tailback D’Onta Foreman wasn’t on the list. He didn’t even crack the top 5. So what is Twitter saying about the Doak Walker finalist and potential high-round NFL selection?

Here’s a sampling of the social reaction from him, his family, the media and his teammates:

Was honestly surprised about D'onta not getting an invite after being consistently productive EVERY game.But the Doak will be his HEISMAN! 🤘

Congratulations to ALL the Heisman finalist. Doesn't take away from D'onta's amazing record breaking season.Must also be gracious in defeat.

A shame Foreman can't make it to New York. He deserved to go.

D'Onta Foreman was the best at his position in college football, IMO. He deserved a trip to NYC. He played at an All-America level all year.

Tough for D'Onta Foreman not to get a Heisman invite. Had he had the season he had and Texas won 8 games, he'd be there.

I can't wrap my head around the fact @D33_foreman isn't a Heisman finalist. Holy Cross's (1-AA) Gordie Lockbaum was a finalist, twice.

Is it really that dependent on wins? #HEISforeMAN

No foreman is flat out disrespectful I'm disgusted

Boy they gotta be DRUNK for @D33_foreman not to be a Heisman finalist.

D’Onta Foreman named All Big 12, but only third best offensive player in league