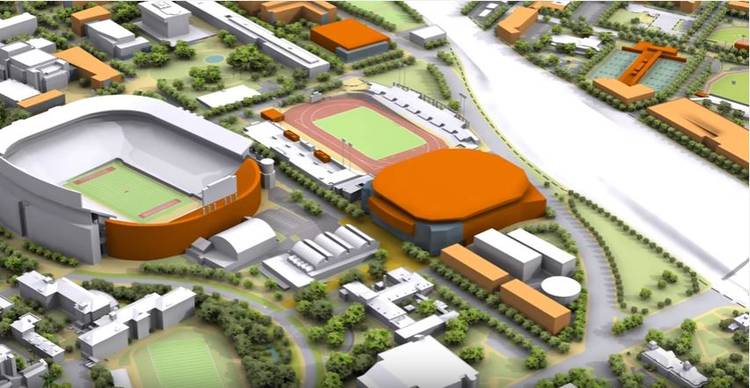 University of Texas officials prefer a site just south of the Mike A. Myers Stadium for the Longhorns' new basketball arena. They've also discussed tearing down the Lee and Joe Jamail Swim Center to place the arena at that location. (University of Texas)

It’s looking more likely that the Erwin Center replacement will be built on the parking lot south of Mike A. Myers Stadium and Soccer Field with the first shovel in the dirt no sooner than 18 months from now. Then allow for two years of construction, so the first basketball season in the new arena may be 2022-23. Who knows, by then, maybe the Longhorns won’t be the worst team in the Big 12. Swimming coach Eddie Reese said he’d heard the school was considering blowing up leaky Joe Jamail Swim Center, building a new indoor pool in the Myers parking lot and then erecting a basketball arena in the old Swim Center/UT Social Work building area. One source said that idea remains very far-fetched. Reese told me he knows it’s been discussed. “We’ve talked about ideas of a pool, and the parking lot south of the track was talked about. They’d need the social work and our building and have to divert around the Santa Rita (oil rig), but I think they decided it could work.”

Texas running back D’Onta Foreman’s status should be rising, but NFL Draft analyst Lance Zierlein doesn’t see as much movement as you would think with the speedy, tough 2,000-yard rusher. “He helped himself with his workout, but there are still teams I spoke with who didn’t budge on their grade,” Zierlein told me. “I see him as a late second to mid-third round. I’m fine with it. It’s a deeper running back draft, and there isn’t the same love affair with grabbing early running backs that there used to be.” As for offensive lineman Kent Perkins, running back Johnathan Gray, and quarterbacks Tyrone Swoopes and David Ash, Zierlein said none of them will be drafted.

Skip Johnson returns to the Disch:

Skip Johnson returns to Texas where he was one of the best pitching coaches in college baseball for 10 years, but he’ll be the enemy this weekend with Oklahoma. “I was blessed to have the opportunity to coach under the greatest college baseball coach of all time, Augie Garrido,” the Sooners pitching coach said. “I haven’t done anything different at OU than I did at Texas.” OU sophomore Jake Irvin out of Minnesota ranks third in the Big 12 at 5-0 with a 1.16 ERA. OU’s pitching staff is led by seniors J.B. Olson and Vincenzo Aiello.

For the rest of Kirk’s 9 Things, including his thoughts on Reese, the NCAA women’s tourney and an addendum to his “Bathroom Bill” column, click here.

WATCH: ‘They need to get tougher’: Tom Herman on UT wide receivers in spring practice