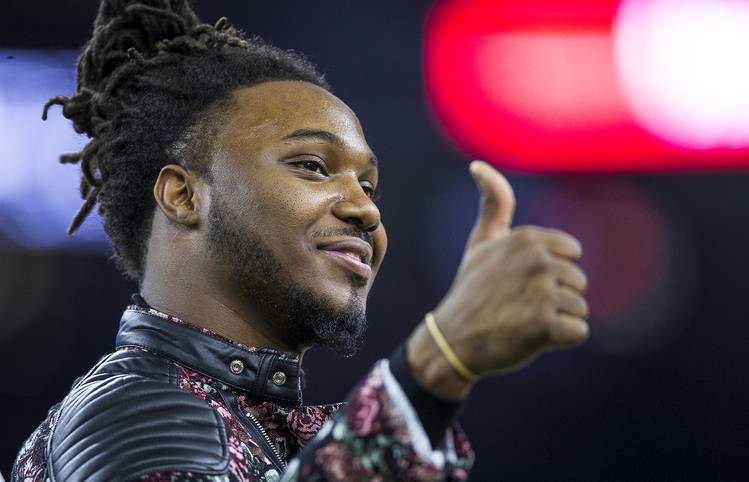 Houston Texan running back and Texas alumnus D'Onta Foreman gives a thumbs up to fans before the start of the Texas Bowl NCAA college football game between Texas and Missouri in Houston, Texas, on Wednesday, Dec. 27, 2017. NICK WAGNER / AMERICAN-STATESMAN

Former University of Texas standout football player D’Onta Foreman has entered into an agreement with Travis County prosecutors to dismiss all charges related to a July 2017 arrest in which campus police found a gun and marijuana in his vehicle.

Foreman on Jan. 22 pleaded no contest to a misdemeanor count of disorderly conduct for making unreasonable noise, according to his Austin lawyer, Sam Bassett. The charge will be dismissed if Foreman stays out of criminal trouble for 90 days from the commencement of the agreement, County Attorney David Escamilla said. As part of the deal, Foreman also must pay a $500 fine and forfeit the SIG Sauer P226 .40-caliber handgun that police found in his vehicle.

“It’s the right result for the situation,” Bassett said Tuesday. “It’s not like Mr. Foreman didn’t learn a lesson from this, but he didn’t commit a crime.”

Foreman was arrested July 16, just days before he was due to report to his first NFL training camp as a rookie running back with the Houston Texans.

According to UT police, officers responded to a report after midnight about the smell of marijuana coming from three occupied vehicles near the southwest side of San Jacinto residence hall. Officers arrived and discovered marijuana in each vehicle and a firearm in one of them.

Foreman, who was operating one of the vehicles, was charged with unlawful carrying of a weapon and marijuana possession of two ounces or less. Both are misdemeanors. He was booked into Travis County jail where he spent about nine hours before he secured his release on bond.

Foreman had said he was in Austin over that weekend to visit friends.

A passenger in Foreman’s vehicle came forward to claim ownership of the marijuana, Escamilla said. Foreman released a statement after his arrest insisting he had not been smoking. A urinalysis taken days later came back negative for marijuana, Bassett said.

Foreman, of Texas City, captured the Doak Walker Award as college football’s top running back in 2016. He left school early to turn professional, and was selected by Houston in the third round of the 2017 NFL draft. Foreman appeared in 10 games as a rookie before rupturing his Achilles in November. He finished the year with 327 yards rushing and two touchdowns.