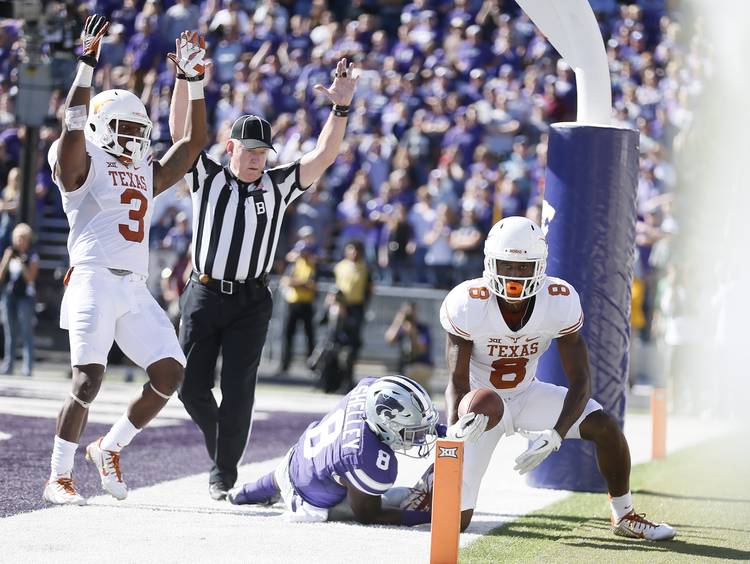 Dorian Leonard was a stand-up guy Monday and admitted he flat-out dropped a big fourth-down pass in the third quarter. “I took my eyes off it, trying to run before the catch,” he said. Asked if he could have scored on the slant pattern, he said, “Oh yeah, I would have scored easily.” Leonard has become a surprise this season, much like John Harris did in 2014. The offense is spreading the ball around, but could it help to have two or three go-to targets? Leonard certainly is making his case for that.

Dylan Haines told us that there will hopefully be no brawls between Baylor’s Bears and the Longhorns this year, but he expects that same energy and excitement to exist when the rivals meet on Saturday. Let’s see if any of that energy and excitement can be found on Texas’ defense, though, because Baylor’s scoring 43.7 points per game. The Bears have been held under 30 points five times since the start of the 2013 season; Texas is responsible for two of those games.

Kirk Bohls: Boyette sure gets it (almost)

Paul Boyette may be the best interview on the team. He’s smart, candid and funny, and as almost a 23-year-old, he’s wise. I really admire him and like how he’s playing and attempting to lead. If leadership is an issue, the problem certainly isn’t Boyette, who’s carrying his weight and who addressed the Texas-Baylor rivalry head on without flinching: “We’re still Texas,” he said. “It’s not like we’re chasing them.” Well, according to the Big 12 standings, maybe you are Paul.

Baylor’s 6-0 for the fourth time in four seasons, while Texas is 3-4 for the third straight year. The perception remains that Baylor is superior to Texas even if three of the Bears’ wins have come over Northwestern State, SMU and Rice. It makes me wonder if future schedule makers at Texas will consider front-loading non-conference schedules with lesser programs, to get that winning feeling back. I guess the question is would you rather have a softer 6-0 instead of a hard 3-4? Bring on Northwestern State.

Golden: It’s a cliché, but Baylor matchup is another ‘crossroads’ game for Texas