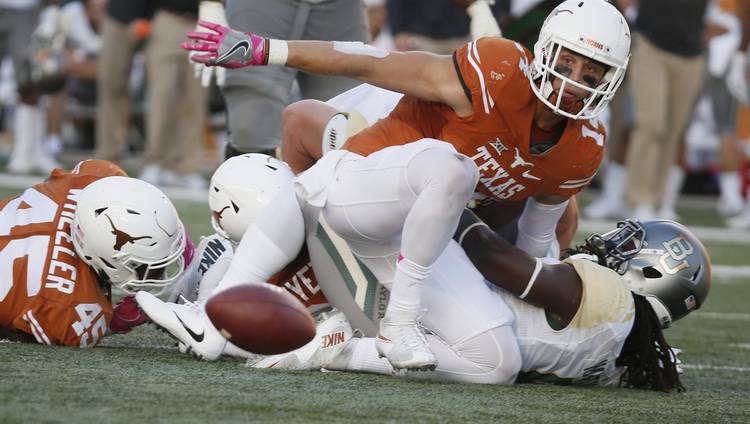 Texas Longhorns safety Dylan Haines makes his way to try to pick up the fumble on the Texas side of the field against Baylor Bears during the NCAA college football game, Saturday, October 29, 2016 at Texas Memorial Stadium, Austin, Texas. RICARDO B. BRAZZIELL/AMERICAN-STATESMAN

Texas senior safety Dylan Haines has been nominated for the 2016 Burlsworth Trophy, which is given annually to the top walk-on in college football. Haines walked onto the Texas football team after he graduated from Lago Vista High in 2012, and he earned a scholarship in 2014.

Haines and Mayfield are two of the 51 nominees for the 2016 Burlsworth Trophy. Texas A&M punter Shane Tripucka, Houston running back Dillon Birden and Rice wide receiver Zach Wright are also under consideration. The 2016 Burlsworth Trophy will be awarded on Dec. 5, and the trophy’s three finalists will be honored in a ceremony held in Springdale, Ark.

Haines’ 11 interceptions are tied for ninth in the Texas record book, and he is 24 yards shy of setting the school mark for return yards off of interceptions. Haines has started in six of Texas’ eight games this season, and he has tackled 23 opponents and recovered  a fumble. Ironically, his two interceptions this fall were both recorded off of Mayfield passes.

Texas releases ‘Sights and Sounds’ video from win over Baylor