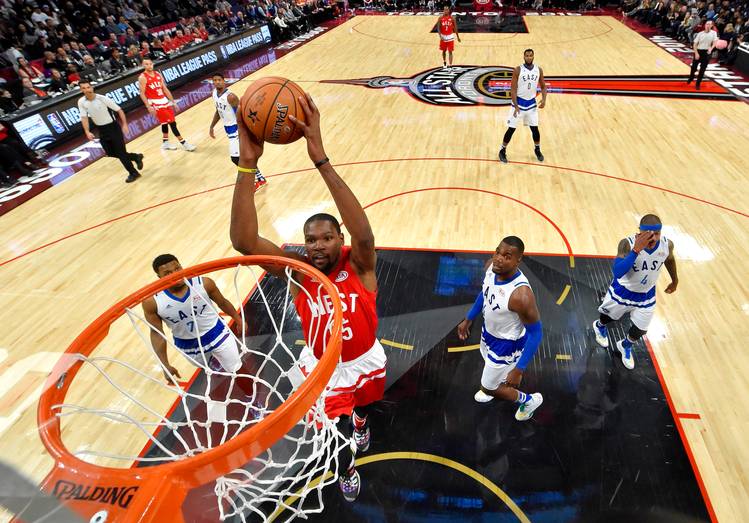 Sunday’s record-setting NBA All-Star game marked the first time the game was played outside of the United States. Held in Toronto, the NBA said goodbye to Kobe Bryant as it ushered in the next brand of legends in the highest scoring NBA All-Star game ever. Among those players were two former Longhorns, Kevin Durant and LaMarcus Aldridge. Here’s a quick look at how these Longhorns performed in the NBA All-Star game. Be sure to check back here every Thursday as we track all of the Longhorns in the NBA.

Kevin Durant started for the Western Conference in his seventh appearance at the NBA All-Star game and scored 23 points on 11 of 18 shooting. He also had five rebounds and seven assists.

LaMarcus Aldridge had a quiet night, scoring just four points as he went 2 of 8 from the field coming off the bench. He added four rebounds and a steal in his fifth appearance in the All-Star game.

One of the highlights of the weekend was the use of customized All-Star shoes for the players. Here are Durant’s.

The Longhorns’ representatives were even given their own emojis on Twitter. Durant’s was a copy of his jersey number while Aldridge got an L-Train to accompany his hashtag.

Another former Longhorn who was watching the game had some thoughts on all the fun being had:

The NFL should take notes from the NBA. Allow us to express our creativity without fining us.Celebrate our players while we R still living.

Super Bowl XLVIII Champion and perennial Pro Bowler Earl Thomas thinks the NFL could ease up on some celebration rules. And was that last line a bit of commentary about the NFL’s handling of players after they’ve retired?