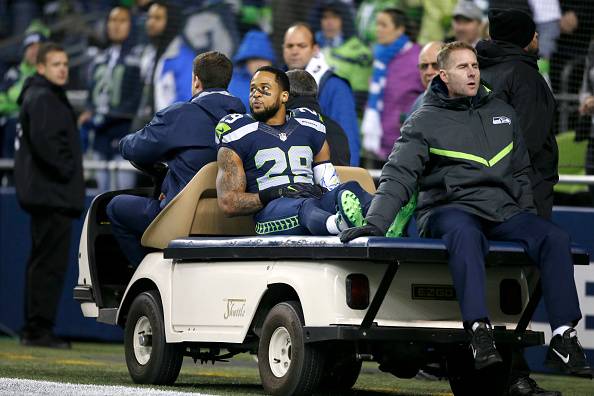 SEATTLE, WA - DECEMBER 04: Free safety Earl Thomas #29 of the Seattle Seahawks leaves the field after getting injured against the Carolina Panthers at CenturyLink Field on December 4, 2016 in Seattle, Washington. (Photo by Otto Greule Jr/Getty Images)

Thomas isn’t accustomed to missing games so it’s understandable that the Seahawks’ star safety was more than devastated after breaking his leg on a collision with teammate Kam Chancellor on a Monday night pass play.

Before this season, Thomas had never missed a game in college or the pros. He played all 27 games in his two years with the Texas Longhorns them played 118 consecutive games to start his NFL career before missing a Week 12 loss at Tampa Bay with a hamstring injury. So imagine his dismay after he took the brunt of the Chancellor collision and was carted off before a national television audience.

Half an hour after doctors had told him of his injury, Thomas took the twitter and actually thought about giving it all up.

His teammates quickly explained that Thomas was tweeting in the heat of the moment which makes sense. It also gives us an idea of how much he lives to play the game and how much passion goes into getting prepared from week to week.

If I had to call it, we’ll see Thomas back in uniform next season. He’s only 27 for starters. Plus he signed a four-year, $40-million contract extension in 2014 that had nearly $28 million in guaranteed money attached, then making him the highest paid safety in the league.

Young people would simply describe Earl as being “in his feelings” after a tough break. He’s as fierce a competitor as there is in this league and plays much bigger than his 208-pound frame. He knows only one way to play this game and that’s all out and when you play that way, injuries are bound to happen.

Thomas and Chancellor set the tone for Seattle’s Legion of Boom and his absence makes that defense less formidable in pass coverage over the middle. You don’t replace an All-Pro overnight.

Mock draft: D’Onta Foreman could be first Longhorn taken in first round since 2015