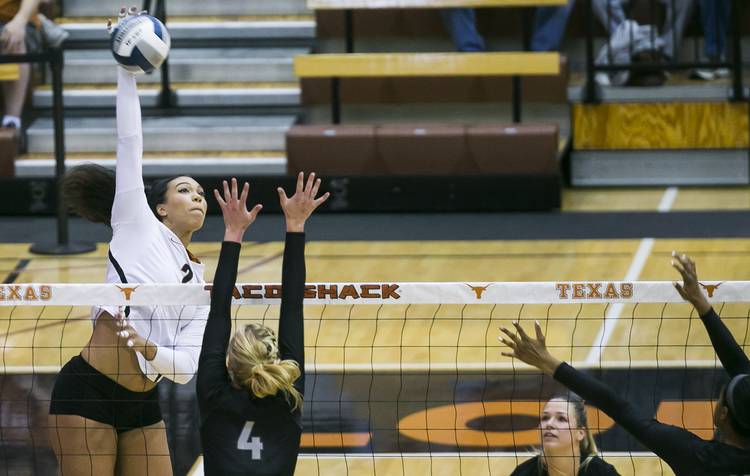 In high school, Ebony Nwanebu and Andie Malloy chased championships on the same side of the net. On Thursday, they will attempt to prevent each other from winning a collegiate crown.

Nwanebu’s Texas Longhorns will meet Malloy’s Nebraska Huskers in a NCAA semifinal match on Thursday in Columbus, Ohio. Texas (26-4) will need a big contribution from Nwanebu, a junior outside hitter who earned AVCA All-America honors this week. Malloy is averaging 2.67 kills per set during her senior year with the Huskers (31-2).

Mallory and Nwanebu played together at Lovejoy High in Lucas, and they were members of the school’s 2010 and 2011 Class 3A championship teams. In 2010, both players earned spots on the UIL’s Class 3A all-tournament team. Nwanebu, in fact, was the MVP of the Class 3A championship game in 2010, and Mallory earned that award the following year.

On Thursday night, the former teammates will be rivals.

“I’ve known Andie since our awkward pre-teen years, and we ended up going to the same high school together,” recalled Nwanebu, who said the two players exchanged messages on Twitter this week. “And she’s one of my have best friends.  And she was my setter.  I don’t know, I love her and it’s going to be weird seeing her across the net.  But I’m excited.”

Nwanebu had a 13-9 lead on Malloy in the kills department when Texas and Nebraska played in August, but Nebraska swept the Longhorns. That was the first meeting in college between the Lovejoy graduates. Malloy arrived at Nebraska this year as a graduate transfer from Baylor, and Nwanebu was injured for both of Texas’ 2015 matches against the Bears (Nwanebu played her first two years at USC).

The showdown between Nebraska and Texas won’t just be a reunion for Lovejoy High. Nebraska seniors Amber and Kadie Rolfzen have played on national teams with Chloe Collins and Nicole Dalton, who are both senior setters on Texas’ roster. Collins said on Wednesday that she was looking forward to seeing the twin sisters off the court, and she added that “friendships are still there, whether we’re competing against each other or with each other.”

“It’s just kind of cool, the volleyball world is pretty small,” Amber Rolfzen said. “And you have great friendships that come from it, whether you’re playing against them or on the same team as them.”