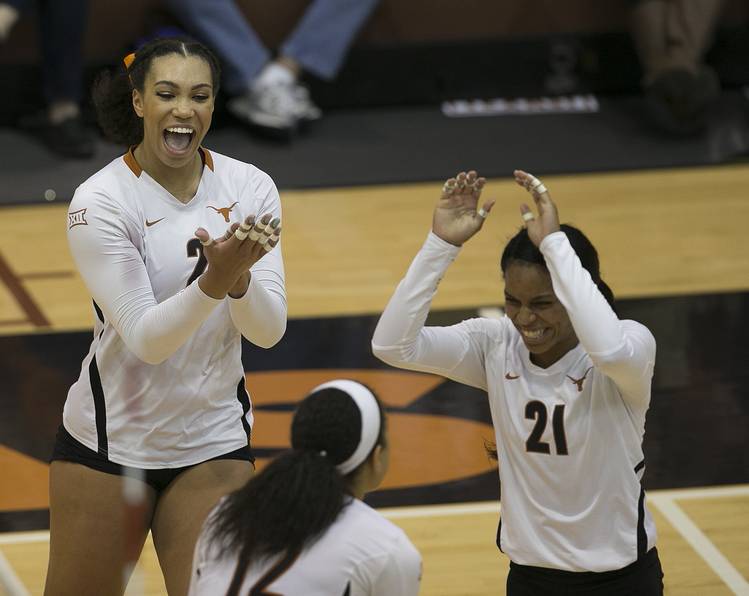 During the 2016 volleyball season, Texas junior Ebony Nwanebu shined on and off the court.

Sidelined by a back injury in 2015, Nwanebu bounced back this fall. She ranked second among the Longhorns with her 423 kills and 3.78 kills-per-set, and she also registered 74 blocks and 17 aces. The 6-foot-4 outside hitter was lauded by her conference (All-Big 12 first team) and country (AVCA All-America first team).

In the NCAA championship game on Saturday, Nwanebu recorded 16 kills to cap a week in which she earned all-tournament honors. Texas, however, was beaten by Stanford in four sets.

Nwanebu, who is majoring in youth and community studies, also endeared herself to the Texas fans with her #EbbOnTheWeb video series. Those videos were published on the volleyball program’s Twitter account throughout the season, and they featured Nwanebu interviewing and interacting with her teammates and coaches.

Here are some the memorable #EbbOnTheWeb videos from the 2016 season:

Throughout the season, Nwanebu was unable to book one guest: junior Mirta Baselovic. Following Texas’ sweep of Nebraska in the national semifinals, Nwanebu was aided by sophomore Yaazie Bedart-Ghani and ESPN’s Holly Rowe as she attempted to drum up enough support to coax Baselovic onto the show.

Baselovic, though, was not an easy get. The middle blocker tweeted that she would go on Nwanebu’s show if she raised $219 (a dollar amount that matched the likes of the Bedart-Ghani video at that time) for the International Rescue Committee, which is a humanitarian aid organization. Baselovic’s demands were quickly met — the fundraiser had earned over $800 as of Sunday morning — and she appeared in the #EbbOnTheWeb finale.