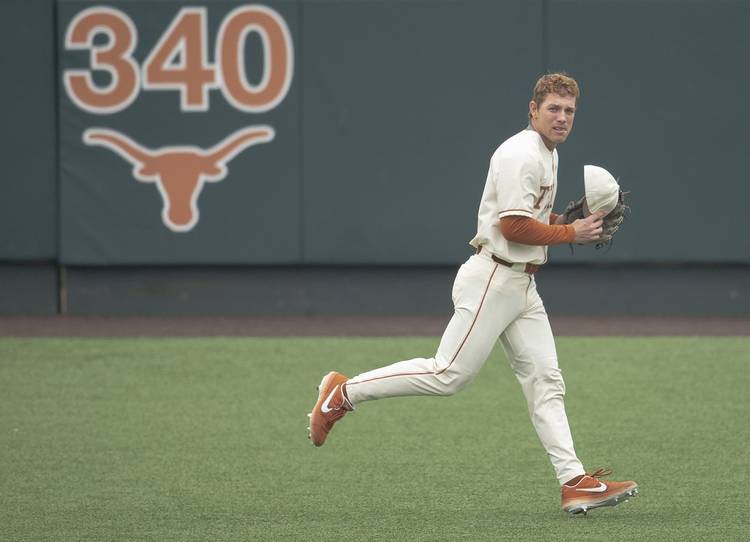 Texas outfielder Eric Kennedy (30) runs back to his position after losing his hat while chasing down a fly ball during an NCAA baseball game against LSU on March 2, 2019, in Austin, Texas. [NICK WAGNER/AMERICAN-STATESMAN]

This weekend, Xavier will be in town for a three-game series at UFCU Disch-Falk Field. Like baseball programs across the Big 12, the Musketeers will be getting to know UT freshman outfielder Eric Kennedy.

Among Big 12 freshmen, Kennedy ranks first in batting average (.311), runs (27) and RBIs (20). Kennedy has registered more walks than strikeouts. The Big 12’s reigning player of the week is also six-for-six on his attempted steals.

Defensively, Kennedy has committed one error this season. That mistake, though, was costly in last month’s 4-0 loss to Purdue. On Wednesday, Kennedy said he needed to get better in the field.

Advertisement
“I’ve made probably 10 mistakes out there. I definitely need to pick that up if we’re going to be our full potential,” Kennedy said. “Coach (David) Pierce always says ‘Pitching and defense wins and hitting will come.’ I need to improve my defense so we can have the best chance to win.”

Kennedy’s older brothers, Ben and Nick, both played at Texas. He, however, did not grow up wanting to be a Longhorn. Kennedy scoffed at the idea of having a dream school, rationalizing that “if you try to go to one specific school and they don’t let you go there or you don’t get offered by them, it will just crush you, you feel like you’re a disappointment. You’ve just got to love it wherever you go.”

Originally an Alabama pledge, Kennedy de-committed due to that program’s coaching instability. According to Kennedy, Texas offered a scholarship after seeing him run 6.46 seconds in the 60-yard dash at a national showcase. Pierce confirmed that UT did not see Kennedy play before offering, but he said the team felt comfortable with that decision based on assistant coach Sean Allen’s film review, Kennedy’s family tree and the fact that he was being recruited by SEC schools.

“We felt like he was a little stiff, but the one thing that’s so hard to measure in recruiting is just what’s in their gut, what’s in their heart. This is a young man that is so coachable,” Pierce said. “It’s awesome watching this kid grow. He’s going to be a superstar.”