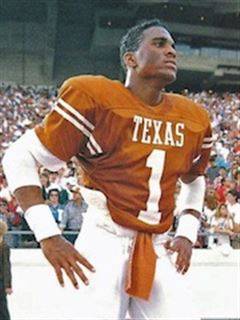 Johnny Walker, who was a star receiver on the 1990 team that won the Southwest Conference championship, will be inducted Saturday into the Texas High School Hall of Fame this weekend.

Walker was the choice of all high school players from the 1980s.

Playing for Holmes High School in San Antonio, Walker was viewed as the top receiver prospect in the state. He caught 114 career passes at UT, and was part of a dominant receiving group that also included twins Keith and Kerry Cash.

Walker caught the winning touchdown against Oklahoma in 1989 that snapped the Longhorns four-year losing streak against their arch rivals.

He was also the rare player to be drafted by the NFL and Major League Baseball.

Here are the other players joining Walker and their bios provided by the Hall of Fame:

Speedy fullback and linebacker at McKinney High School rushed for 1,070 yards in 13 games, leading Lions to 1958 Class 3A semifinals, where they lost to eventual state champion Breckenridge. A year later, earned 3A all-state and all-American honors when he rushed for 850 yards on 143 carries despite missing 3 games with a shoulder injury. Became 3-year starter at TCU, leading Frogs in rushing each season to finish his career with 1,583 yards and 10 TDs. First-team all-American as a senior fullback in 1963. Drafted by Green Bay in 1964 as a linebacker, he spent 8 seasons in the NFL and was part of the last team to win three straight titles, including the first two Super Bowls, in 1965-67.

Played linebacker at Temple Dunbar High School where he was recruited by North Texas. Greene boosted North Texas to one of the most successful periods in program history as the Mean Green went 23-5-1 during Greene’s three varsity seasons. Greene was selected by the Pittsburgh Steelers with the fourth overall pick in the first round of the 1969 NFL Draft. He went on to win four Super Bowl rings as a cornerstone of the Steelers’ “Steel Curtain Defense.” Greene was elected to the Pro Football Hall of Fame in 1987.

Played a vital role on one of the great defenses in the history of Texas high school football when he helped Big Sandy win three consecutive state championships in 1973, 1974 and 1975. Smith, Big Sandy’s middle linebacker, and the Wildcats surrendered just 15 points during the 1975 campaign when they went 14-0 and defeated Groom 26-2 for the Class B state title. His bio on the Illinois athletics website states that Smith was an All-State selection at defensive end and linebacker and that he twice earned All-American honors at Tulsa during his college career. After his college playing career, Smith returned to Big Sandy as the Wildcats’ defensive coordinator. That began a prestigious coaching career that is still going. Smith coached defense in college from 1983 to 1995. Then he left Ohio State as the defensive backs coach to join the staff of the Tampa Bay Buccaneers. He eventually became the defensive coordinator for the St. Louis Rams and head coach of the Chicago Bears and Buccaneers before returning to college football as head coach at Illinois in 2016.

Helped lift Rockport-Fulton to a 9-1-2 season and its first district championship in 20 years as a junior in 1992. He had key game-changing tackles, causing a fumble that was returned for a touchdown in a district win over Taft, and another big hit that shifted momentum in a pivotal district tie versus Sinton. The Pirates posted a 17-4-2 record during Nguyen’s junior and senior seasons. Nguyen drew the attention of college recruiters and came close to signing with Michigan before Texas A&M wooed him and he signed with the Aggies. Nguyen thrived at Texas A&M, earning first-team All-Big 12 three times and capturing the Big 12 Defensive Player of the Year honor in 1998. He also won the Chuck Bednarik Award and earned All-American honors in 1998. He made the Big 12 10th Anniversary Team in 2005 and the Associated Press All-Time Big 12 Team in 2010. Nguyen finished his Texas A&M career with 517 tackles and an Aggie-record 51 straight starts. During a seven-year NFL career with the Dallas Cowboys, Nguyen made the all-rookie team in 1999, was named second-team All-Pro in 2003 and finished with 389 career tackles.

Multi-sport star led Panthers to Class 5A (now 6A) Div. II state title in 2001, running for 159 yards and passing for 223 to rally Lufkin from a 21-3 deficit to beat Austin Westlake, 38-24. Finished season with 2,385 yards passing (134 of 307) for 24 TDs, 856 yards and 10 TDs rushing, plus 7 interceptions as a crunch-time DB to earn all-state honors for second straight season and East Texas Player of Year honors. Three-year-starter led Lufkin to 33-8 mark (9-2 in playoffs), with 5,935 yards passing and 64 TDs. Named Offensive Player of Year and all-American by SuperPrep, which ranked him No. 3 QB recruit in nation. Signed with Texas A&M. Three-year starter for Aggies finished atop A&M’s career list for passing yards (6,992), total offense (8,876). Chosen by Cincinnati in 2006 NFL Draft, spent parts of 7 seasons in NFL and CFL.