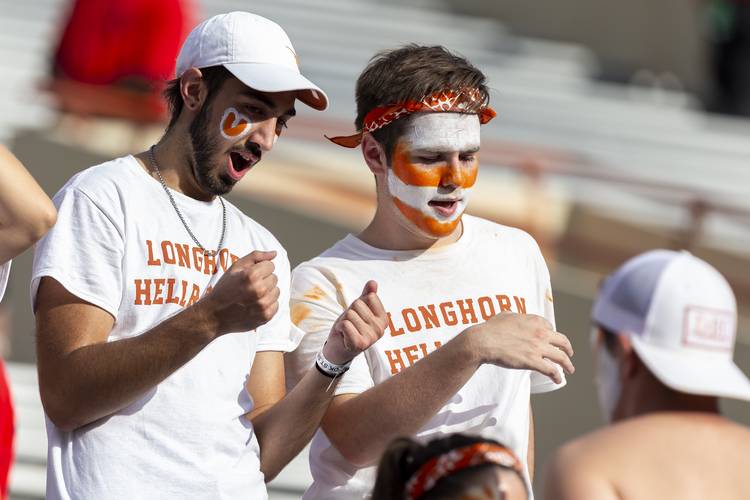 Texas fans dance as they wait for the start of an NCAA college football game at Royal-Memorial Stadium, Saturday, Sept. 21, 2019. [Stephen Spillman for Statesman]

It’s a sold-out game against Oklahoma State. Where were the Texas students at kickoff?

Still waiting to get into Royal-Memorial Stadium, apparently.

There is a chance they let the rest of the students in by the time they play Lizzo. #HookEm pic.twitter.com/MFg4Fysps2

This is what the student section looks like. We are 60 seconds away from kickoff.

I’m being told the students are here, they’re just waiting in a slow-moving line outside of DKR. pic.twitter.com/fQr4NAbpat

Texas officials had announced a new student entry policy after students rushed past security to get a good seat for the LSU game on Sept. 7: lining up for a wristband and entering through a single gate.

On Saturday, students reported long wait times to make it into Royal-Memorial Stadium for the Big 12 opener:

After arriving at DKR an hour early, I'm standing in line .2 miles away to enter the single student entrance. For reference, last year I was in 30 min before the game with no problems. pic.twitter.com/VpqLTHpR1P

@iFratelliPizza is passing out pizza to students standing in line far from the stadium. pic.twitter.com/geEjQxmRZ9

Stadium staff are working as fast as they can to meet the demand of Big Ticket holders. Kickoff was scheduled for 6:30 pm. pic.twitter.com/lcEuQWUMhZ

@statesman y’all should check out the line to the student section at the @TexasFootball game 6 minutes before kickoff.

Hey Students! We're working on getting you guys into the game before kickoff. We're getting some more gates open.

Those are student seats. The entire section in the SE corner is empty, too. https://t.co/BoNnHPyD7s

If this was the NFL, Texas students would be suing over these delays getting into the stadium #HookEm

@_delconte if you’re going to sell me a ticket, give me a seat. Not that hard man. Thousands of students turned away. Class action suit incoming.