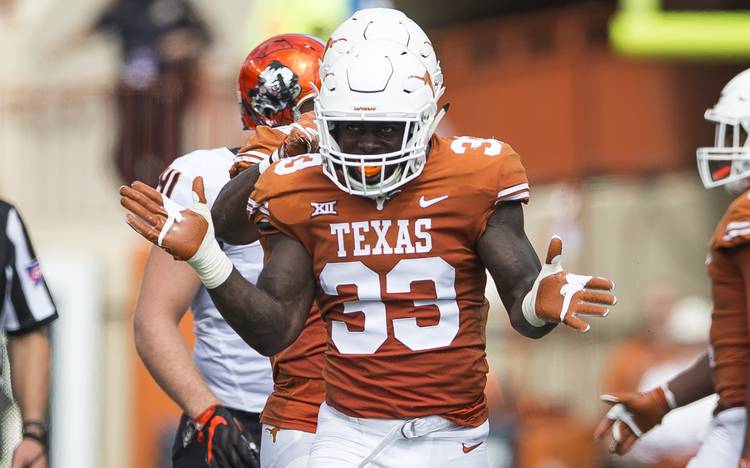 Johnson was a three-sport star at Douglas High School (Ala.) during his prep career, even winning the Class 5A state title in the 100-meters with a time of 10.59. From high school, Johnson ended up at Dodge City Community College in Kansas, where he’d go on to set records as a sideline-to-sideline linebacker with a nose for the football. In two years, he set a school record with 215 tackles. He also recorded 11.5 sacks and five interceptions. This earned him the honor of becoming the No. 1-ranked inside linebacker in the JUCO ranks in the 2017 class. He chose Texas after not being able to transfer to Alabama due to an SEC rule.

Who Johnson has been here — so far

It didn’t take long for him to become a constant presence at linebacker next to Malik Jefferson. Johnson’s speed and instincts are too rare to keep off the field, especially in a conference that demands athletic linebackers to blitz and cover in space. He played in all 13 games, starting seven, and finishing with 60 tackles and two sacks. Six of his tackles were behind the line of scrimmage. He led the team with 10 tackles in the bowl win over Missouri and planted himself as the leader of the linebackers group heading into 2018.

Johnson’s dislike of opposing quarterbacks and running backs is evident on his Twitter page. His Twitter name has long been “I Hate QB’s & RB’s.” The pinned tweet on Johnson’s profile is a claim that he’s located “in a backfield near you.” The UT defense, though, needs those online boasts to remain on-field realities.

Tom Herman has referred to Johnson as a “hammerhead.” While describing Johnson’s speed last year, ex-UT linebacker Naashon Hughes said, “I’m from a track city. He’s for real about his speed.” Johnson’s ability to unleash that physicality and speed will determine how successfully Texas can replace Jefferson and his team-high 110 tackles at the rover linebacker position.​