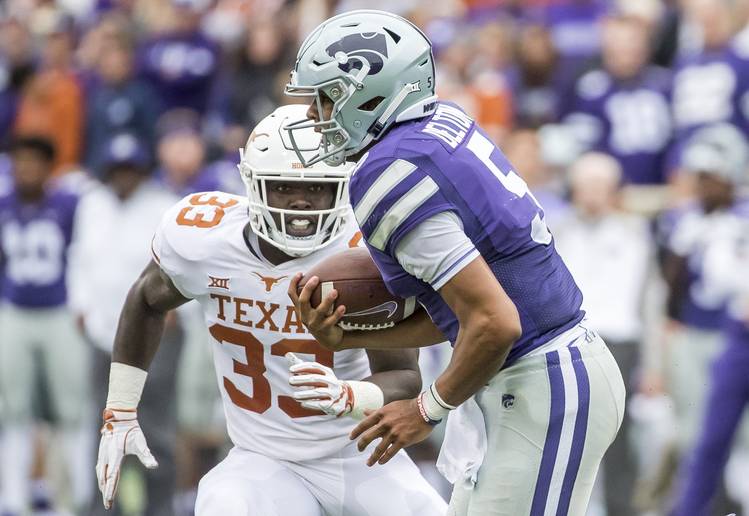 Who makes the All-Big 12 football team at this point:

What Chris Nelson did during Texas’ open week:

Asked what he did on the bye week, Texas defensive tackle Chris Nelson said, “Hibernate. I didn’t leave my bed, except for Gatorade and water. Did I sleep 12 to 14 hours a day? Yeah, honestly I did.” Omenihu said he studied tape. I asked at the beach? He said, “I don’t have money for the beach.”

What changes need to be made to the College Football Playoff system:

I know this will disappoint all my Central Florida fans, but here’s the reality: I’ve missed the last several UCF Conspiracy meetings, and frankly I think my dues are past due. Seems my most recent Associated Press Top 25 ballot upset the fan base because I ranked an outstanding UCF No. 11 behind Ohio State. How many of you think UCF would beat the Buckeyes? Would UCF beat any top 10 teams? Maybe. I’m actually a UCF advocate. Some have pointed out UCF barely got by a Memphis team that in turn got clocked by a mediocre Missouri, but UCF also crushed a Pitt team that nearly upset Notre Dame. I do think UCF could beat some Top 10 teams. It did so last year to Auburn’s despair. But Power 5 teams also play a more challenging, rugged schedule. I have made it clear that the Group of 5 has been royally screwed by the “democratic” process that’s supposed to be the College Football Playoff system. There is nothing fair about it. It’s not their fault they’re not in a Power 5 conference. They’d love to be and reap all those rewards that come with such membership. In truth, there’s the Power 5 and the Powerless 5. That’s why I adamantly support expanding the playoff field to eight teams with five Power 5 conference champions, the best Group of 5 team and two at-large picks, which could be another Group of 5 club. Until this happens, no Group of 5 team will ever crack the (four-team) CFP. Television will always prefer a two-loss Georgia or Notre Dame over an unbeaten UCF. College football needs to be as inclusive.

For the rest of Kirk’s 9 Things, including his thoughts on the World Series, Houston Astros’ recapture of the Round Rock Express and Alabama football, click here.