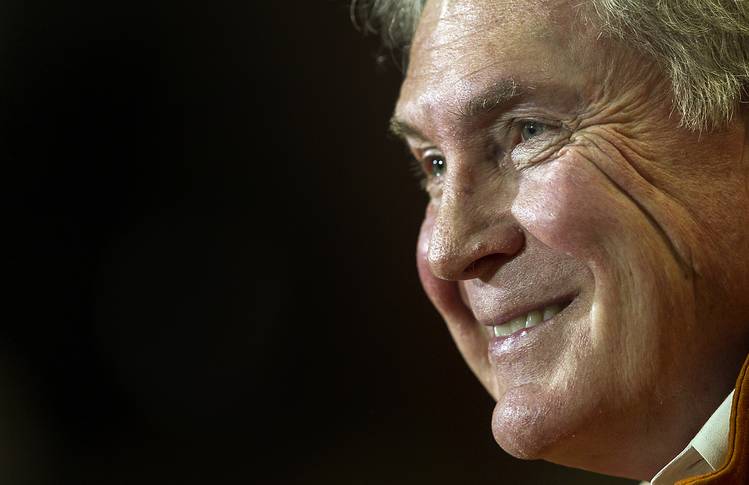 In today’s Golden’s Nuggets, Cedric touches on some Bevo-related items including Mack Brown’s infamous text message to Shaka Smart and Hassan Ridgeway’s NFL chances. Here’s what he had to say on UT:

On Mack’s text to Shaka:

“We haven’t heard hide nor hair from Mack Brown regarding one of the best text messages in Longhorns history.

Call it one of those seminal moments in Longhorn lore. Shaka Smart checks his phone five minutes before 8 a.m. the morning of the Oklahoma game to read these words from the last coach to bring a national football championship to Texas: “OU still sucks.” Later that day, Smart said “OU sucks” to a large group of fans outside the practice facility.

That was all kinds of delicious, though the Mack Brown I know probably wanted to keep that little piece of textage on the extreme down-low.

The Sooners and Coach Bob Stoops, fresh off a an appearance in the college football playoff, aren’t losing any sleep about Brown playing Mack the Knife, especially since the Sooners owned a 9-7 record against Brown-coached Texas teams, including a five-year run of butt-kickings from 2000 to 2004 that we all still remember.

Mack remains one of the best sportsmen to ever coach in college football, but it was cool to get a peek under that public persona to see how he really felt about the one team that caused him the most trouble.

He may have had some uncomfortable moments over the last couple of days since Shaka went public with the tweet, but Mack earned some huge cool points on the Forty Acres.”

“Say what you will about the value of the NFL scouting combine, but one thing remains certain: If you can run, you will get noticed.

Take defensive tackle Hassan Ridgeway, Texas’ lone invite to the league’s annual meat market in Indianapolis. The man coach Charlie Strong dubbed ” The Green Mile” ran the 40-yard dash in 5.02 seconds — a tad faster than former teammate Malcom Brown ran last year — and that’s moving for a 6-4, 307-pound man. He did 24 reps on the bench, posted a 32-inch vertical leap, registered 8.28 seconds in the 3-cone drill. Those are solid but not mind-blowing numbers that won’t hurt his pre-combine draft status.

Unlike what you read in this space about basketball player Isaiah Taylor needing to stay in school for another year, Ridgeway, a projected second-round pick, stands a really good chance to make a team and start earning some good bread right away, as long as he’s drafted in the first four rounds and makes a team. His biggest challenge will be to stay healthy after a junior year that saw him battle assorted injuries, which cut into his playing time.”

For the rest of Ced’s nuggets including his thoughts on Warriors superstar Steph Curry, click here.