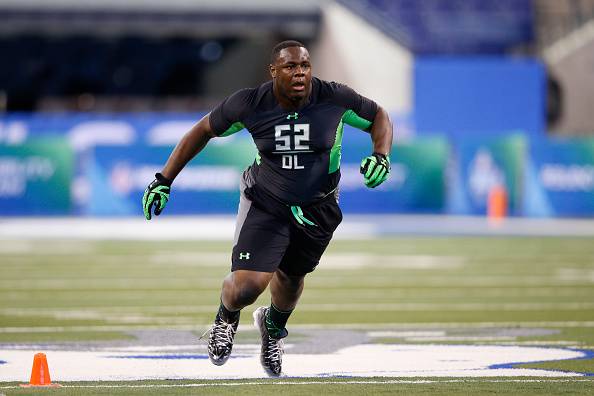 INDIANAPOLIS, IN - FEBRUARY 28: Defensive lineman Hassan Ridgeway of Texas in action during the 2016 NFL Scouting Combine at Lucas Oil Stadium on February 28, 2016 in Indianapolis, Indiana. (Photo by Joe Robbins/Getty Images)

Hassan Ridgeway, your draft wait is over.

The Longhorn defensive tackle was selected Saturday by the Indianapolis Colts. He was selected in the fourth round with the 116th overall pick.

Some analysts had predicted that Ridgeway would learn his professional fate Friday night when the NFL conducted rounds two and three. But Ridgeway was forced to wait another 24 hours.

He gave up his final year of eligibility at UT to turn pro.

Here’s the NFL.com analysis of Ridgeway:

Dense, powerful lower half combined with burly upper body. Snap experience at multiple spots along the line. Explodes out of stance and into his downhill charge. Striking athletic ability for a big. Has some change of direction twitch. Sets hard edge with good punch and arm extension to deny blocker’s intentions. Grows roots against double teams and fights hard for his spot. Defeats most single blocks. Has play power to step through a blocker’s edges with little trouble. Plays with good recognition and quick discard capability to snap down on tackle opportunities. Talented interior pass rusher. Uses coordinated attack with violent active hands and nimble feet. Flashes power to push and quickness to disrupt.

Conditioning has been an issue in the past. Plays hard, but gasses so may need plenty of rotational help. Despite athleticism, range as playmaker is a little limited. Will momentarily lose track of the ball when trying to impose his will on blocker in front of him. Stops flowing outside with play when looking back inside looking to make a play. Hounded by nagging injuries for much of the year. Was hindered by a back issue that arose before the season and then a shoulder injury later. Production didnt always match the talent on the tape.

Hassan Ridgeway selected by the Colts in the #NFLDraft. Congrats @r1dge8! #HookEm pic.twitter.com/32rVwpxCK5

Longhorns have success at Drake Relays

Instant reaction: Horns blanked 3-0 by OSU in game one of doubleheader