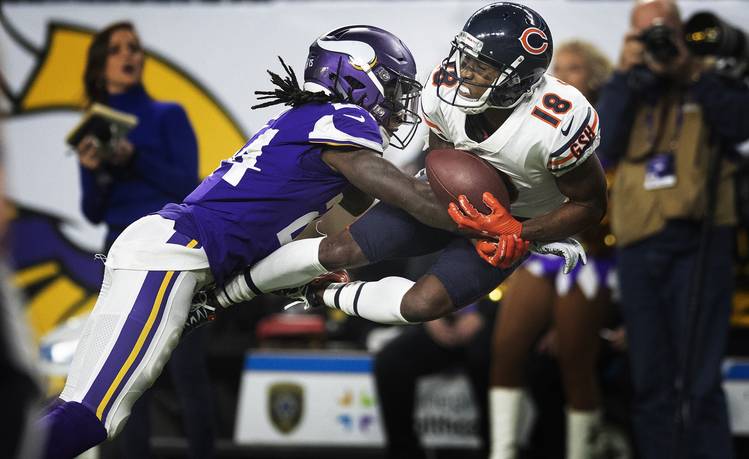 ST. PAUL, Minn. — Holton Hill finished last season as a key member of the Vikings’ secondary, and had high hopes for 2019.

A chance to fulfill those hopes, though, became delayed in April when the second-year cornerback was suspended for the first four games of the regular season for violating the NFL’s policy on performance-enhancing substances. He won’t be able to play until Week 5 at the New York Giants.

“I’m just learning from my mistakes, knowing what you put into your body,” Hill said. “I’m responsible for everything that goes into it. I’m taking it as a learning experience, and I’m just growing from there.”

The former Texas starter said he took a substance before a workout and was unaware it was on the banned list. He declined to name the substance.

“I have to be more educated with like pre-workouts and stuff that I take,” he said.

Hill will miss games against Atlanta, Green Bay, Oakland and Chicago and can’t practice the first four weeks. He’s optimistic about quickly being able to jump back into things when his suspension ends.

“Just knowing that I’m not going to be here for the first four games, I still prepare myself as if I was going to be here,” said Hill, who will be docked $134,118 of his $570,000 salary. “Everything that I put into the tank, it’s going to eventually come out, and the more work I do, it doesn’t matter when I get the opportunity, it’s going to come for sure.”

Hill got in for just 20 defensive snaps in his first six games as a rookie. But in the final nine games, with the Vikings having injuries, Hill was in for 57 percent of the snaps and had three starts.

“With the NFL, everything comes with reps and repetition,” he said. “So, once you get the repetition out there, and you get your confidence right, it’s all about you just going out and playing the game.”

The Vikings are set with starting cornerbacks Xavier Rhodes and Trae Waynes and with primary nickel back Mackensie Alexander. Mike Hughes could have the edge over Hill as the top reserve on the outside, but only if he is healthy.

Hughes did not participate in spring drills after suffering a torn ACL last October in the sixth game of his rookie year. With Hill out, that puts more of a premium on Hughes being ready for the start of the regular season.

Nicknamed “Hollywood,” Hill is hoping his versatility can make him an even more important player in 2019. He worked during the spring on returning kickoffs and punts.

After not having a kickoff return in a game since high school, Hill brought back two for a 41.5-yard average in the 2018 preseason and then had three for a 28.3 average during the regular season.

Hill hadn’t returned a punt since high school until getting four in the preseason finale, but he didn’t have one in the regular season.

“I just like to keep getting the (practice) reps on returns until my number is called,” Hill said.

Running back Ameer Abdullah returned kickoffs for the second half of last season, and could again have that role. Punt returner Marcus Sherels signed with New Orleans as a free agent and that job is wide open, with other candidates including wide receivers Chad Beebe and Jordan Taylor.

“That’s probably the biggest thing for (Hill) is just getting a ton of reps,” said Marwan Maalouf, in his first year as Vikings special teams coordinator after six years as Miami’s assistant special teams coach. “When I was in Miami, we had a guy who never did it in college. … Jakeem Grant. I thought he was pretty good.”

At cornerback, Hill’s athleticism helped him get by last season. He’s now looking to refine his play.

“I want to be more of a student of the game,” he said. “Kind of just like having an idea of what’s going to happen before the play even happens and stuff like that. The athletic ability is there. Now, I’m trying to work on more of the mental aspect of the game.”

He’s also been giving plenty of tips to Kris Boyd, a cornerback taken in the sixth round of the draft in April who had been Hill’s teammate at Texas. Hill calls Boyd his “best friend” and “brother.”

“He pretty much says, ‘Just stay in the playbook and keep watching film,’ ” Boyd said. “You can always get better at something.”

Hill won’t be around to offer Boyd pointers during the first four weeks of the season. When he returns, though, he vows not to miss a beat.