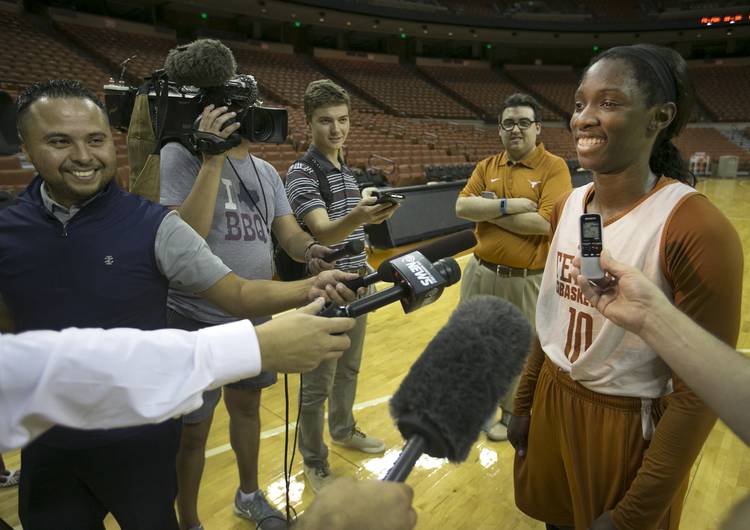 For incoming freshman Lashann Higgs, a McDonald's All-American from the Austin area, it has been a long time coming as is ready to contribute in anyway possible this season. The University of Texas Women's basketball team is set to open their season as they scrimmage against a student men's squad Wednesday afternoon November 4, 2015 in the Erwin Center. RALPH BARRERA/ AMERICAN-STATESMAN

1. How close is Texas to becoming a Final Four contender?

Ranked No. 12 entering the season, the Longhorns have made steady progress during Karen Aston’s tenure. With the signing of the Nos. 2 and 6 recruits in the country on Wednesday — forward Joyner Holmes of Cedar Hill and point guard Alecia Sutton of St. Louis — should contend for a national title in the next 3 or 4 years.

2. How long will it take Lashann Higgs to make an impact?

Not long. The Big 12 preseason Freshman of the Year was the leading scorer (21 points) in the last formal scrimmage against the men’s practice team. Look for Empress Davenport and Brooke McCarty to start the season. Higgs is too good to leave on the bench for long.

3. Who are the team leaders?

Texas has a strong senior class in post Imani Boyette and guards Brady Sanders, Empress Davenport and Celina Rodrigo. If healthy, Boyette could be an All-America candidate. In six post-season games last spring she averaged 14.3 points and 10.2 rebounds.