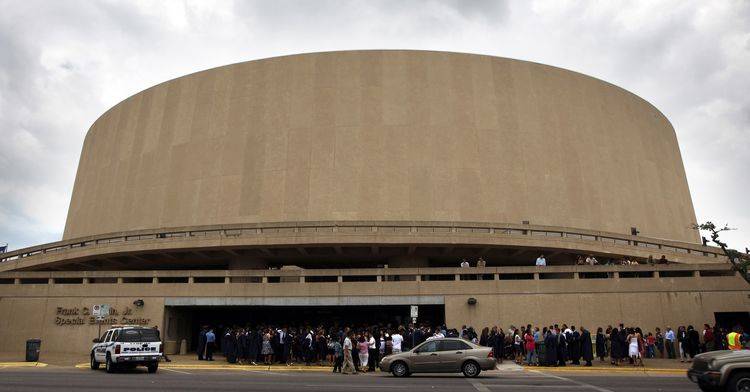 The Erwin Center is home to the UT men’s and women’s basketball teams but also features graduations, concerts and other events --- but not for long. The building soon will give way to the new Dell medical school. UT regents have OK'd the spot for UT's next arena, which will be located just south of Mike A. Myers Soccer Stadium.(Ricardo B. Brazziell/American-Statesman)

Officials at The University of Texas announced Friday that they have decided on a location for the university’s new basketball arena, one that would replace the Frank Erwin Center.

The new arena will be built on campus, probably in the parking lot south of the Mike A. Myers Stadium and Soccer Field. This area will be more accessible for students and athletes, something that university president Gregory L. Fenves and both basketball coaches Shaka Smart and Karen Aston have all desired for some time.

While the coaches and school officials think the new arena is a good thing, here’s how some of the Longhorn faithful took the news on social media Friday (edited for clarity and style).

On Facebook, some debated how well the Erwin center has stood the test of time…

Jennifer Welsh Sebesta: “Lol. I haven’t been inside in years but I was driving through town the other day and thought to myself that Erwin still looks good and well maintained. A classic.”

Weston Kuenstler: “Awesome! That thing is so out of date.”

While others speculated other uses for the location…

Susan Craven Dixon: “The best place would be on the LBJ parking lot. Get rid of that awful building beside LBJ and in between LBJ and the Myers parking garage. There is plenty of room to build it there plus add another parking garage for it and LBJ.”

Phillip Leal: “They need a parking garage there for the Texas games.”

Danny Taliaferro: “I hope the new arena only seats about 500 so it looks full on TV.”

On Twitter, users shared the same kinds of opinions.

As long as the parking situation is addressed.

Hey, this is where you could put your big ass much needed data science big data thingymajig. Problem solved.

And of course, @EvilMopacATX weighed in with a traffic-heavy stance.

What do you think about University of Texas’ new basketball arena? Let us know in the comments.