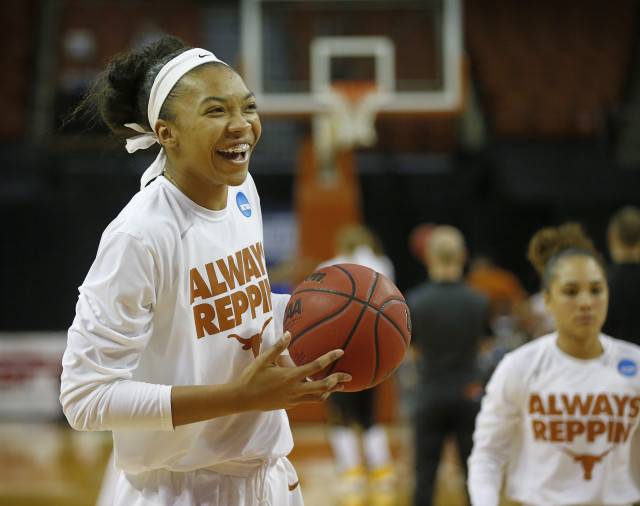 “Dear Basketball,” she wrote in a piece for espnW. “I didn’t realize how much I’d really miss you until the buzzer sounded in my last Longhorns basketball game.”

Her letter is part of espnW’s weekly poetry series on influential female athletes and women in sports, honoring National Poetry Month. Although Boyette is known for being the first Longhorn to reach the combined milestone of 1,000 career points, 1,000 career rebounds and 200 career blocks, she’s also a slam poet.

“She’s adamant about the things she cares about,” said Texas assistant coach Tina Thompson. “She looks confident in a crowded room, and you hear her voice.”

The Los Angeles native writes in her poem about how her relationship with basketball matured over time, her struggles with depression, her family’s basketball legacy and her future with Chicago Sky. In the end, she makes a promise to love the sport better.

And so, here’s to Boyette’s “budding relationship” with basketball.

Read her whole poem below.

I didn’t realize how much I’d really miss you

Until the buzzer sounded

In my last Longhorns basketball game

But this time, it wasn’t for us

I cried my way through the eyes of Texas

In college, we started to get serious

When they started putting expectations on our relationship

trying to take me out

And I blamed you

The after game press conferences

The constant quest to be better

The suicides, the 300s, the gassers

I didn’t think I could do it

I never thought we’d get here

In the beginning, I downplayed our relationship

Told them I was just using you

To get out of California

To go to college

To get a degree,

And still you were there

Remembering who we used to be

Basketball, I never had a choice in this relationship

There were taller girls,

But you kept rewarding me

I was born to hall of famer Pamela McGee

My aunt, Trisha played in the WNBA and is now a college coach

My dad played in Beijing

We were just the inevitable

This is the first time I’ve had a choice

And here I am choosing you

There I said it

I hiccup before games

Because you still make me nervous

Almost a decade in

I say the same prayer at the jump ball

I just want to put on that jersey again

Say that same prayer when the ball tips on May 14

I promise to love you better

You’ve given me a platform

Reminded me that I’m stronger than I think

Here’s to our budding relationship basketball