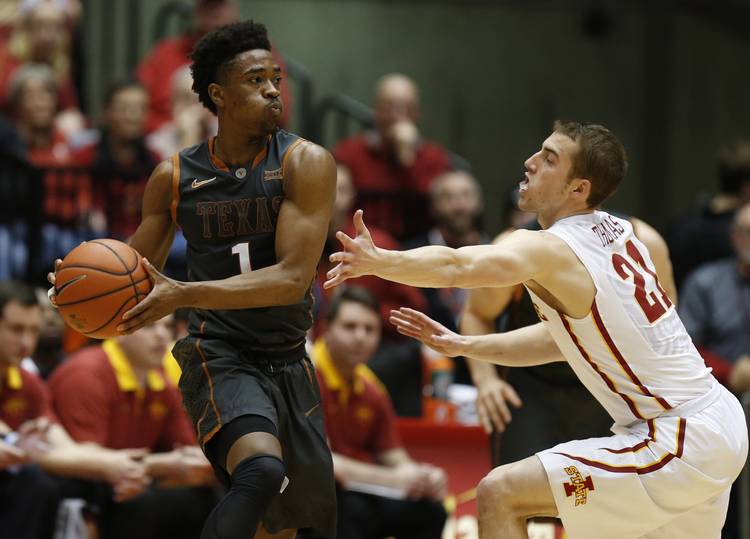 Texas guard Isaiah Taylor passes the ball while being guarded by Iowa State's Matt Thomas in the first half of play at Hilton Coliseum on February 13, 2016 in Ames, Iowa. (Photo by David Purdy/Getty Images)

AMES, Iowa — On a blistering cold Iowa night, No. 24 Texas had an answer for almost every Iowa State run. But it still wasn’t enough as the 14th-ranked Cyclones pulled away in the final minutes for an 85-75 victory.

Texas (16-9) fell to 7-5 in the Big 12 race just one week after it appeared coach Shaka Smart’s bunch could be a dark horse title candidate. And the Horns may still get their chance. Texas plays four of its final six games at home.

But Iowa State (18-7, 7-5 Big 12) was buoyed by the return of Jameel McKay, who was suspended the last two games for essentially walking out on coach Steve Prohm in practice.

For the Longhorns, Javan Felix had a team-high 18 points. However with Prince Ibeh in foul trouble, the game evolved into a 3-point shootout, and the Horns were just 8 for 28 from beyond the arc.

Saturday’s matchup was the fifth straight road game against a top-15 opponent — a first in Texas basketball history. Last February, the Horns played five straight ranked opponents in a row, a first in UT history at the time.

After the previous matchup in Austin, Iowa State’s Georges Niang expressed wonder at Tevin Mack’s 3-point shooting ability. Mack turned it loose again, hitting two 3-pointers in the first half. After a wild and wooly second-half sequence, Mack drained another from the right corner, making it a three-point game. He was 3 for 8 from 3-point range against Iowa State on Jan. 12. Saturday, he was 5 for 12 and finished with 18 points.

Texas center Prince Ibeh picked up two fouls just four minutes, 14 seconds into the game. He had four fouls with 9:58 remaining. That meant the Horns had to stick with an outside-oriented game, not their ideal choice. Ibeh fouled out with 2:57 left trying to take a charge. He finished with 10 points and seven rebounds.

Texas guard Kendal Yancy said Thursday this team was getting mentally stronger. “They’re not going to punk us,” he said. Yancy backed up his words with another solid performance. He drilled two 3-pointers, scooped up a key loose ball and finished with 10 points. Yancy jokes that he does things that don’t show up in the box score. But he’s tallied up double figures two straight games.

What happened to Texas’ perimeter defense? The Longhorns came into the game with the best 3-point defense in league play. Big 12 opponents were hitting just 31.4 percent of their shots beyond the arc. The Cyclones were hitting 55.9 percent from downtown midway through the second half. Georges Niang was 3 for 3. As a team, Iowa State was 6 for 11 beyond the arc.

The Longhorns will scurry to the airport and get home as fast as possible. Temperatures are hovering in the teens here in Ames. Texas gets two home games next week, the first coming Tuesday against No. 10 West Virginia. Coach Bob Huggins team simply demolished TCU with a 73-42 win on Saturday. WVU and Kansas currently sit atop the Big 12 standings with matching 9-3 league records.