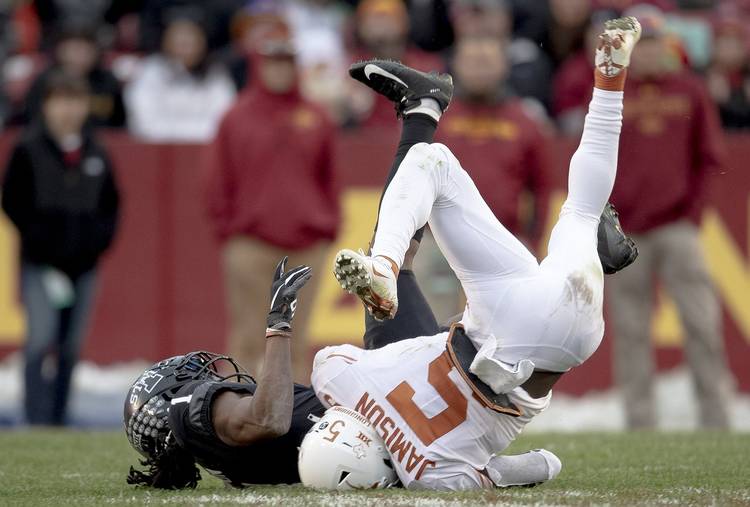 There were lots of momentum switches, big plays, clutch calls and back-and-forths, but if you’re looking to answer how the Longhorns lost this one, it came down to this:

On fourth-and-5 with less than two minutes left, Iowa State — trailing 21-20 — lined up for a 42-yard field goal try by redshirt freshman Brayden Narveson. It’s good, and Sam Ehlinger would have had one final shot to rally Texas. It’s no good, and the Longhorns likely win by running out the clock.

Instead, Joseph Ossai was called for offside.

That gave the Cyclones new life. And the opportunity to run out the clock with Texas out of timeouts.

Connor Assalley drove his 36-yard effort right through the uprights, and Iowa State — with its four losses by 11 points this season — won it on the final play, the crowd going wild to the tune of “Sweet Caroline.”

The good news: Texas covered, struggled for most of the game but heated up when it had to, and put itself in position to win.

The bad news: So much for the Big 12 championship game hopes.

The offense slumbered throughout the first three quarters, save for one 30-second spurt at the very end of the first half, and committed several key mistakes in the final three minutes — a critical pass interference penalty and an even more critical offside. Why the Longhorns, who looked electric in the passing game in the fourth quarter, decided to try to run out the clock with three minutes left, we’ll never know. Well, we’ll certainly ask, of course.

Well, the Cyclones were due. After all those one-possession heartbreaks, including last week in Norman, they finally got it done at the end. Texas had dominated this series, taking a 14-2 series edge and three straight double-digit wins over the Cyclones into Saturday. Brock Purdy went over the 3,000-yard mark and the Cyclones controlled the third quarter and the final two minutes.

The Longhorns will play in a bowl game, but they won’t play in the Big 12 championship game. That may very well be an Oklahoma-Baylor rematch no matter what happens tonight in Waco.

How Texas fared on first, second, third and fourth downs:

Third downs: Texas, which ranks fourth nationally in third-down conversions, was 6 of 17 today. The average play needed was third-and-6.

Next up for Texas: Baylor