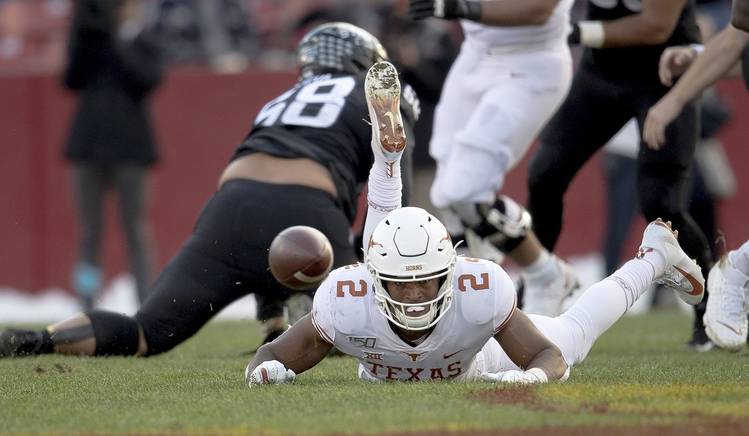 Hmm. Which is colder today?

(a) The temperature in Ames.

Texas produced only 30 yards in the first quarter. The first six drives went gone punt, punt, punt, punt, turnover on downs, and punt — until that final-minute spurt that saw Sam Ehlinger march UT down the field 75 yards in 30 seconds for a touchdown pass to Brennan Eagles that had to be reviewed. The running game is struggling, the passing game has been struggling and it was hard to point out anyone who stood out on that side of the ball until the very end of the half.

2. The Longhorns, who rank fourth nationally on third-down conversions, are struggling to move the chains. They’re 1 of 7 so far.

3. Texas is going without Collin Johnson, who’s out with a sore hamstring. Malcolm Epps caught Ehlinger’s first pass. And there was a Marques Washington sighting, too; the freshman couldn’t convert a third-and-7 pass on UT’s first drive. But Eagles came on late and there have been two catches upheld by reviews.

4. Through two quarters, only three Longhorns have caught a pass.

5. Jalen Green was suspended for the first half after the targeting ejection last week. Anthony Cook got the start in his place. Green should be on the field for the second half.

6. B.J. Foster was shaken up toward the end of the first quarter while trying to tackle Kolar.

Iowa State will get the ball to start the third quarter.

Agony in Ames: Walk-off kick works against Texas this time in 23-21 loss