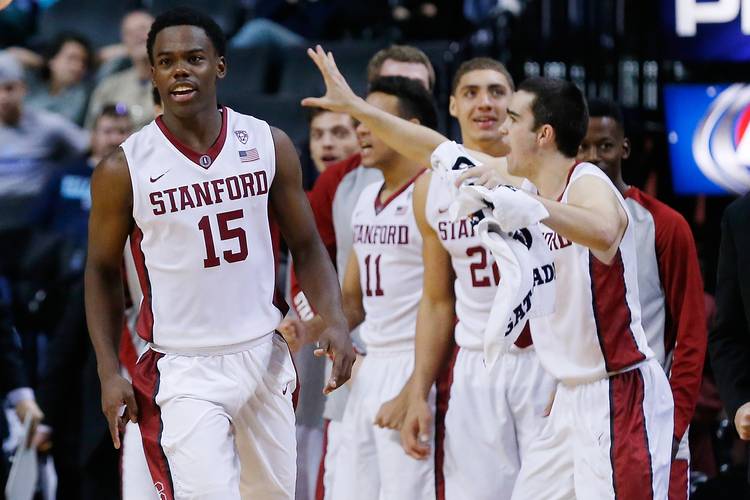 Stanford's Marcus Allen celebrates after hitting the go-ahead basket in the final seconds of the second half against the Arkansas Razorbacks at Barclays Center on November 27, 2015 in Brooklyn borough of New York City. (Photo by Mike Stobe/Getty Images)

About the Longhorns: This will be Texas’ first true road game of the season, but not the first road trip. The Horns have already been to Shanghai, China, and played three games in the Bahamas. UT went 1-3 in those four games. … This team struggled on the road last season, posting a 4-7 record away from the Erwin Center. … For the first time in his career, senior Cam Ridley is averaging a double-double. He was one block shy of a triple-double against Appalachian State. … This is a home game for Isaiah Taylor, who grew up in Hayward, Calif., about 30 minutes from Stanford. Taylor currently has the sixth-best assist-to-turnover ratio in school history (1.77). Javan Felix is eighth (1.66).

About the Cardinal: This series, while there haven’t been many games, has always been close. Two of the last three games have been decided in overtime. … Marcus Allen is off to a sensational start from 3-point range. He’s hitting a career-high 41.2 percent beyond the arc. Allen has finished in double figures every game this season, after missing the first two with a foot injury. … Watch Dorian Pickens, a key spark off the bench. Pickens had 11 points and 10 rebounds against No. 8 Villanova. … This is Christian Sanders’ first season as the starting point guard. The senior is considered a distributor, not a scorer. … Michael Humphrey is currently fifth in the Pac-12 in blocks.