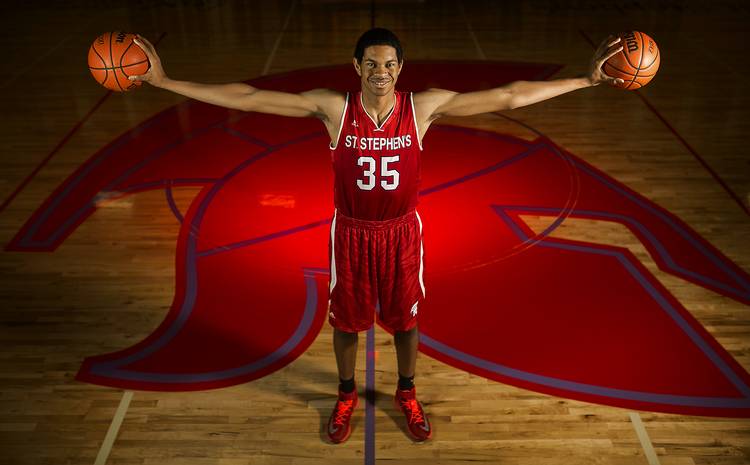 “Shaka Smart is looking for inside help in 2017, and help could be on the way. It needs to be, because three of Texas’ bigs are seniors and the fourth, junior Shaq Cleare, hasn’t yet shown he’s starter-quality. Top 20 national recruit Jarrett Allen is just what Texas needs. The 6-foot-9, 225-pound St. Stephen’s power forward took in Texas’ meltdown against Kansas, his fourth Longhorns game to attend, and said Monday’s debacle would have no bearing on his decision. Texas’ need for instant playing time might. “It’s definitely something you look at,” Allen said. “I’m just looking for a good school where I feel comfortable.” He’s also considering Kansas, Kentucky, Notre Dame and Houston. “If I went to Texas, I’d basically be playing in my backyard.” Asked if that’s a good or bad thing, he said it was good. Kid looks impressive.”

On Myles Turner’s success in the NBA:

“Ran into Kevin Mackey, the former Cleveland State head coach best known for (a) being fired after being arrested outside a crack house, and (b) for knocking off Indiana and (c) nearly upsetting David Robinson’s Navy team in the Sweet 16 in 1986. He’s now scouting for the Indiana Pacers and couldn’t stop talking about former Longhorn Myles Turner, who’s one of the best rookies in the league. He slipped to the Pacers at No. 11 because he was misused and not developed during his one year at Texas. “We love him. He’s carrying us right now,” Mackey said. “He’s a beautiful kid. Heck, he’s younger than most of these guys out here (at the Erwin Center).”

“Isaiah Taylor’s plantar fasciitis injury could be a crippling blow to Texas if the point guard can’t practice regularly and is playing at less than 100 percent productivity because he is the entire engine for the team. “It’s a painful injury, one of those things you kind of have to grit your teeth,” Smart said. “We’re talking about a guy whose game is based on explosiveness and quick movements.” … Smart is still looking for all-the-time competitiveness in his team and said when he got on ‘em after the win over Oklahoma, “they looked at me like I had three eyeballs. I think competitiveness is a central trait among all the best teams and players. The best guys don’t turn it on and off.”

For the rest of Kirk’s 9 things including his thoughts on Big 12 expansion and who excelled at the NFL combine, click here.