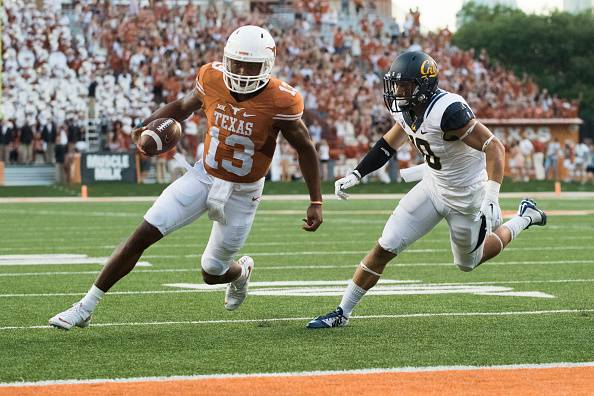 AUSTIN, TX - SEPTEMBER 19: Jerrod Heard #13 of the Texas Longhorns scrambles for a 2 yard touchdown run against the California Golden Bears during the first quarter on September 19, 2015 at Darrell K Royal-Texas Memorial Stadium in Austin, Texas. (Photo by Cooper Neill/Getty Images)

Texas plays at California on Saturday, and unless you were living under a rock around this time last year, the matchup probably has you thinking about two things: Jerrod Heard and a missed extra point.

The Longhorns have long since moved on from the 45-44 loss at Royal-Memorial Stadium, but they did learn one thing that night that continues to be a factor in 2016. Jerrod Heard is extremely dangerous with the ball in his hands.

In nearly leading one of the greatest fourth-quarter comebacks in Texas history, Heard had the most productive offensive game the school has ever seen. His 527 total yards shattered Vince Young’s record from 2005, and he became the first Longhorns quarterback to pass for 300 yards and run for 100 in the same game since Colt McCoy.

Here are five moments that stand out from a night that was unforgettable — for good reasons and bad. You can find all of them in the highlight video below, which has nearly 17,000 views. A copycat version, with music, has more than 9,000.

5:30 1st Quarter: Jerrod Heard rush for 2 yards for a TOUCHDOWN.

The box score doesn’t even come close to doing this play justice, which might be the best way to describe Heard’s talent. He’ll get you out of your seat halfway through a 2-yard touchdown run.

Down 7-0, Heard engineered a 71-yard drive that he finished by completely fooling two Cal defenders and then diving past three more.

When you’re as fast as Heard, you can get away with things.

Like the time Heard ran past the line of scrimmage, evaded three Cal defenders by stepping back behind it, then launched an illegal throw to Caleb Bluiett that would have resulted in a 35-yard gain if not for the penalty.

On the very next play, Heard made up for his blunder with a ridiculous 34-yard scamper.

How ridiculous? He took off from 2 yards deep in his own end zone with 9:22 on the clock. He then ran around the left side of the Texas line, cut back across the field and was run out of bounds on the right sideline with 9:15 left in the half. That’s a distance of approximately 70 yards — accounting for two changes of direction — covered in about 7 seconds.

I’m not John Brenkus, but that sounds fast.

9:00 2nd Quarter: Jerrod Heard pass completion to the right to John Burt for 43 yards to the Cal6.

And he can throw! Heard showed off his arm when he launched a pass down the right side to Burt.

Down by 21 points to start the fourth, Heard launched the comeback with another mesmerizing run. Again, he ran one way before completely burning everyone on his way to the end zone.

Need I describe this one? You remember, right? Heard turned on the afterburners for the last of 163 rushing yards, capping off 20 unanswered points in the fourth quarter. We’ll leave it there, for posterity’s sake. Just make sure you stop the video around the 4:30 mark.

Who knows, we might see a few flashes of Heard’s magic on Saturday night. The Bears sure as heck know who he is now, but that doesn’t mean they can catch him.

Heading to California? Here’s a guide