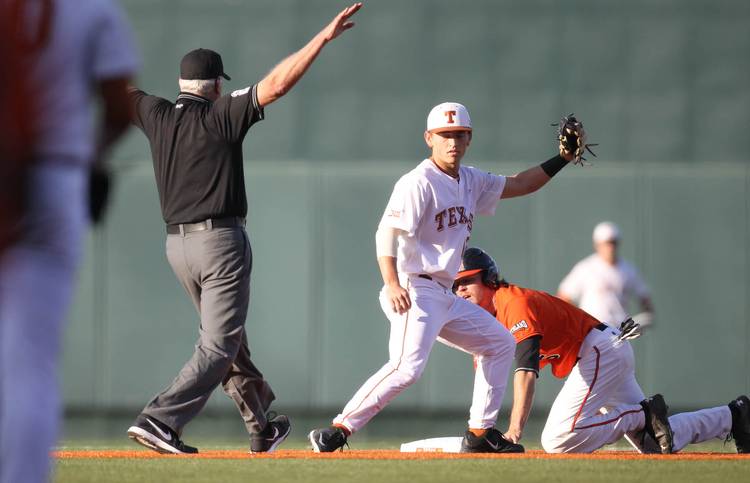 Texas infielder Joe Baker, center looks for the call from second base umpire Randy Christal during a game against Sam Houston State at UFCY Disch-Falk Field on April 14, 2015. (Stephen Spillman for AMERICAN-STATESMAN)

Texas’ baseball team opened a busy week with one less player in its dugout.

Ahead of UT’s game against McNeese State on Monday, it was announced that junior Joe Baker was no longer with the team. A team spokesperson said Baker was dismissed for a “failure to adhere to team rules.” He was a redshirt junior on UT’s roster.

Baker was a reserve infielder for the Longhorns and he appeared in only eight games this season. Baker, who missed much of last year with a shoulder injury, hit .272 with 31 RBIs and 41 runs during his time at Texas.

A McKinney native, Baker started 63 times during the 2015 and 2016 seasons. He was named the Big 12’s Player of the Week once during his sophomore year. He was also suspended for a game in 2016 after an arrest for public intoxication.

Texas (17-12) has five games on this week’s schedule. After hosting McNeese State on Monday, the Longhorns will meet Texas A&M-Corpus Christi a day later at Corpus Christi’s Whataburger Field. This weekend’s three-game series with Baylor is also on Texas’ home schedule.

Joe’s a great kid, he really is. He’s a favorite of a lot of guys. I think for him, personally, he’s got to get some things prioritized. Academically, he needs to do a better job with that. I think he needs to step back and realize what’s important in his life right now.