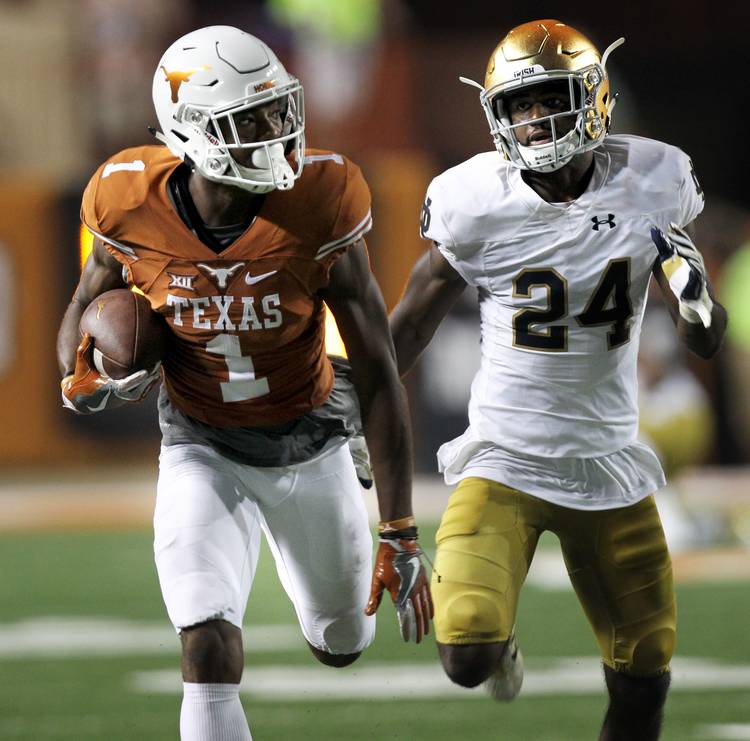 Texas wide receiver John Burt reels in a 72 yard touchdown pass to open the second half and go up 28-14 against Notre Dame at Royal-Memorial Stadium in Austin, TX. STEPHEN SPILLMAN FOR AMERICAN-STATESMAN

On Sunday, Texas receiver John Burt got a pep talk from his new quarterback.

In the first quarter of a duel with Notre Dame – 83 points and many minutes before the Longhorns’ 50-47 win was decided in a second overtime – Burt dropped what would have probably been an 85-yard touchdown pass from freshman quarterback Shane Buechele. Had Burt held onto the football, Texas would have broken a 7-7 tie. The Longhorns instead punted on the next play.

Burt told the media on Monday that he was “kicking myself” after the drop, but he was told by coaches that he’d get more chances. He was also approached by the quarterback whose pass he dropped.

“He was one of the first ones to come over and kind of say ‘Hey, it’s alright. Don’t worry about it, there will be more chances,'” Burt said.

Burt got another chance on the second snap of the second half, and he and Buechele connected for a 72-yard touchdown.  In a game that featured 13 touchdowns, Burt’s ended up being the longest by 42 yards.

Burt entered this season as Texas’ leading returner in receptions (28) and receiving yards (457 yards). Burt was targeted 13 times on Sunday night, and he ended the game with 111 yards on six catches. Four of Burt’s catches were recorded after his drop.

A six-foot-three-inch, 189-pound sophomore from Tallahassee, Fla., Burt said he hopes to get more deep looks throughout the year with the playbook that new offensive coordinator Sterlin Gilbert installed during the off-season.

“I would hope so,” Burt said. “This offense is based on a lot of vertical routes, so getting a bunch of passes down deep, I think, is something we’re aiming for this season.”

Charlie Strong’s Monday presser: ‘You can’t be a one-game wonder’