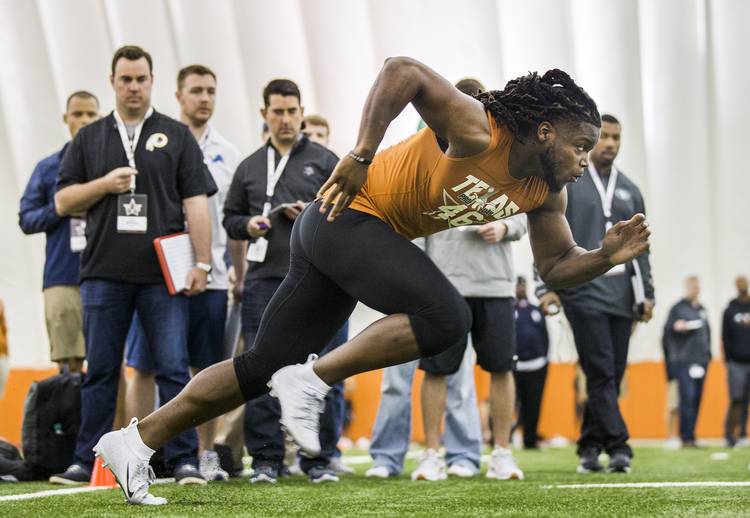 Malik Jefferson was one of the highest profile linebackers to pick Texas out of high school and now another former Parade All-American who picked the Longhorns is ready to help him acclimate to the league.

Fourth-year pro Jordan Hicks, middle linebacker of the Philadelphia Eagles, told USA Today’s Eagles Wire that he is “constantly keeping up with (Jefferson) throughout the process” and willing to help the young linebacker.

Hicks said his relationship with Jefferson goes back to when the young linebacker was being recruited by  Texas:  “Ever since Day 1 when he first came in for his visit it was kind of like, ‘Hey Jordan make sure that you are talking to him.’ Me and Malik have a good relationship. We are probably as close as I’ve ever been to any young linebacker at Texas.”

The two are somewhat similar players as both are known for their athletic ability and making plays, like when Hicks had 95 tackles and five interceptions in 2016 for the Eagles and Jefferson recorded 110 tackles for a loss with four sacks in 2017.

Jefferson has spoken about his relationship with both Hicks and Derrick Johnson, probably the best linebacker to play at Texas in the last 50 years.

He told the Houston Chronicle:  “Yeah, I talk to Jordan and Derrick Johnson all the time, two great mentors of mine. They’ve been there and they’re doing it now in the NFL. When we’re working out, they always ask me my weight. It’s been fun being around those guys and them teaching me things and the league and how to take care of yourself and be strong in the league.”

So what are the chances Jefferson and Hicks could be on the same team in a few days? The Eagles have a first-round pick but don’t draft again until the fourth round, meaning that if they want to take Jefferson, they’ll likely have to use the No. 32 pick. Right now the Eagles are being slated to take an offensive lineman or defensive back in many mock drafts, but with the uncertainty surrounding Hicks himself — in three NFL seasons Hicks has played just one full season — taking a linebacker could be plausible.

USA Today notes:  “There are a number of ways the Eagles can go with their first-round pick. If they decide to go with a linebacker, Jefferson makes plenty of sense with the pick. He’ll also have someone in place to show him the ropes.”

Bohls: Malik Jefferson a third-round pick at the earliest per one NFL draft analyst