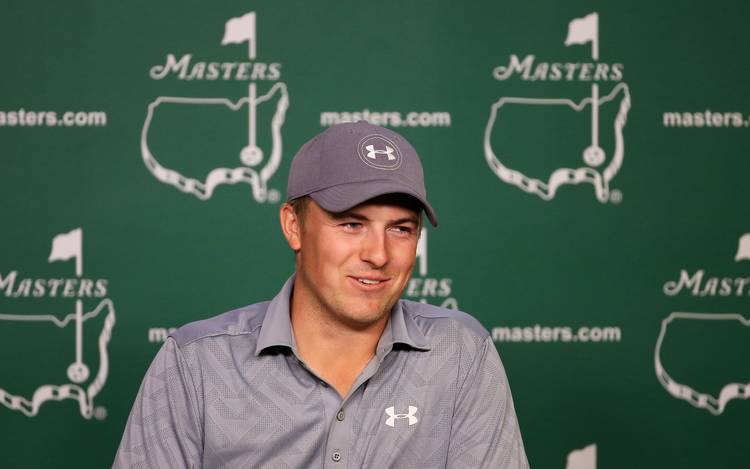 Jordan Spieth speaks to the media during a practice round prior to the start of the 2016 Masters Tournament at Augusta National Golf Club on Tuesday. (Photo by David Cannon/Getty Images)

Columnist Kirk Bohls is in Augusta this week to see if former Longhorn Jordan Spieth can repeat again as Masters champion. He’ll be filing daily blogs of the tournament and some of the fine details. Today Kirk takes a look at Spieth’s chances and how he could pull off a repeat victory. Some of the highlights of his column:

On why Spieth is the odds-on favorite:

“To be sure, the former Texas Longhorn is no up-and-comer, even at 22. He’s an up-and-stayer. Like for decades.

And while his current season appears to be a slight dip, you can bet it is a momentary one. He’s salivating to defend his Masters championship at the place where he scored 28 birdies, became the first to ever reach 19-under par, the fifth ever to lead wire to wire, and tied Tiger Woods’ record of 18-under 270.

On why slipping to No. 2 in world rankings (behind Jason Day) might be a motivator for Spieth:

“The discarded ranking might have even come as a relief to Spieth. He insinuated he might be able to creep quietly onto Augusta National, but he’s flying under the radar about like Donald Trump. Spieth may have officially played in only two Masters, but he won one and finished second in the other. By his count, he’s played up to 25 rounds here. This course with its wide-open fairways, relenting rough and undulating greens just fits his eye.”

On whom Spieth is sharing a locker with at this year’s tournament:

“He seems totally relaxed. He talked glowingly of getting “fired up” when he packed his green jacket. He’s loved wearing it around, even while grilling with friends. During one of his two trips back to Augusta since his championship, he sneaked into the dressing room and noticed he’d be sharing a locker with four-time champion Arnold Palmer. On Tuesday, he hosted the Champions Dinner, but planned to do “more listening than talking.”

For Kirk’s entire column on the former Longhorn and Rory McIlroy’s comments on trying to topple him this year, click here.

They said it Class of 2016: Slidell St. Augustine’s D’Andre Christmas-Giles