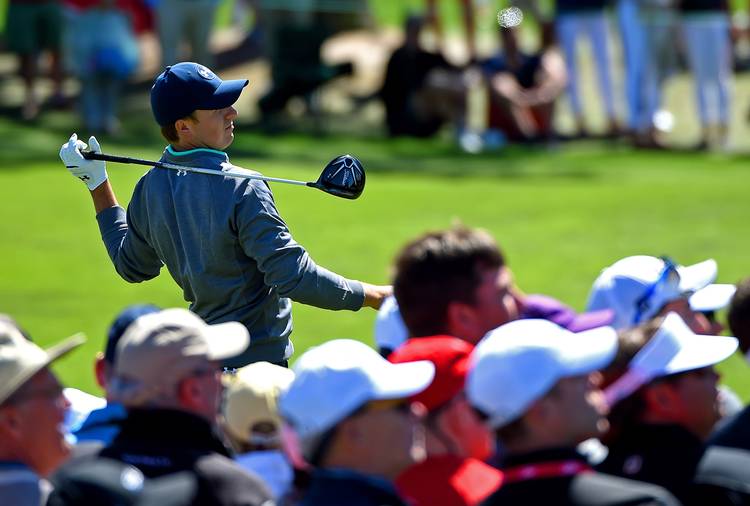 Jordan Spieth follows through on his swing from the 3rd tee during the third round of the 80th Masters.

Two in a row? Wire-to-wire leader both years?

Those two feats have never been accomplished at the same time, and now former Longhorn Jordan Spieth has a chance to make that kind of history Sunday at the Masters golf tournament.

Spieth led all four rounds a year ago, and he is the leader after three rounds this year, making him the first to lead seven consecutive rounds at Augusta.

There was nothing easy about Saturday’s round. And on Sunday, he faces challenges from surprise contender Smylie Kaufman, ageless wonder Bernhard Langer  and young guns Hideki Matsuyama, Jason Day and Dustin Johnson.

As Kirk Bohls reports from Augusta:

It’s beyond cool. It’s downright revolutionary as Langer makes a statement for geezers everywhere. He’s the Peyton Manning of golfers, Tim Duncan in golf cleats. So can he win it? Can he shock the sports world even more than Spieth already has? “I believe I can,” Langer said. “If I play my best, I can shoot 4 or 5 under. But so can Jordan Spieth or any of the others on the leaderboard.”

Heading into the final round, @JordanSpieth has an eye on history. #themastershttps://t.co/ee61GbPOuC