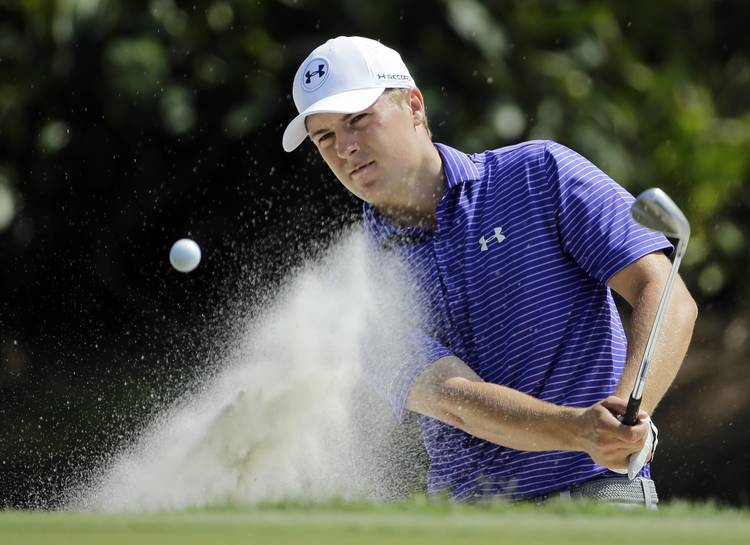 Jordan Spieth hits from the sand on the 14th hole during a practice round for The Players Championship golf tournament Wednesday, May 11, 2016, in Ponte Vedra Beach, Fla. (AP Photo/Chris O'Meara)

It’s everyone else who is looking behind.

The Players Championship is Spieth’s first tournament since he lost a five-shot lead on the back nine at the Masters, most of that on the par-3 12th where he put two shots into the water and made a quadruple-bogey 7.

He received text messages from people who didn’t even have his phone number, reaching out to remind him that sports can be cruel and it happens to the best. He analyzed what went wrong with coach Cameron McCormick, not just on the 12th hole at Augusta National but all week with his swing. He spent a week in the Bahamas with three players who are close friends. There were commercial shoots with corporate sponsors, time in the gym, a practice round at Oakmont and then work on the range.

When he sat down Wednesday for his press conference, 10 of the 15 questions were about the Masters.

“I think people have moved on already — at least I thought so until I came in here today,” Spieth said with a smile.

Perhaps it will take another tournament to move on from the Masters, and this one should get his attention. The Players Championship is the strongest and deepest field of the year, with the richest purse ($10.5 million) in golf on a TPC Sawgrass course that historically favors no one.

“One of the tougher tracks of the year,” Spieth said. “I enjoy that.”

Then again, anything is more enjoyable than his last three hours at Augusta National, right up until the time that Spieth — as defending Masters champion — had to slip the green jacket at Danny Willett.

He attributes his collapse to one bad swing at the wrong time, that he had been missing his shots short and right most of the final round, and paid dearly for that on the 12th hole. That part he can fix, along with a swing that he says has not been the same since late last summer.

In his month away from golf, what has irritated him nearly as much as his own mistakes was the narrative from Augusta, that he lost the Masters more than Willett won.

“It really bugs me when people are trying to take that away from him or shoot it down, and the questions have been asked to him, ‘Do you think this will go down as you winning or him losing? And that’s absolute bull,” Spieth said. “Because he won, and he earned it.”

If Spieth is having to deal with Masters hangover, so is Willett.

Asked what he has done in the last month because of the green jacket in his possession, the 28-year-old from England smiled and said, “Drunk more.”

Willett had played one round of golf in four weeks since his Masters victory, and he was hopeful to work out some kinks in the two days of practice leading up to Thursday’s opening round.

Spieth starts a busy summer stretch in which he plays the next four weeks, followed by a one-week break before the U.S. Open. He has two more majors, the Olympics, a World Golf Championship and the FedEx Cup playoffs on his very full plate.

If the Masters stung that badly, he could have added another tournament just to get back onto a golf course. The temptation was never that strong.

He had a four-shot lead in 2011 at the Masters until he closed with an 80, a debacle that included a tee shot nearly off the property and a four-putt double bogey. McIlroy bounced back two months later and shattered U.S. Open scoring records for his first major.

“I think it was smart of him to take those four weeks off and sort of decompress and get a few things out of his system and just chill out for a few weeks, and then come back fresh for this,” McIlroy said. “I think Jordan will be just fine with everything. I think it makes it a little bit easier that he already has a Masters under his belt. I don’t think we’ll see any long-term problems for him because of it.”

Maybe the best way for Spieth to put the Masters entirely behind him is to hoist another trophy. He shared the 54-hole lead at Sawgrass two years ago with Martin Kaymer before fading, so at least he knows he can score on the Stadium Course.

How will he handle contention? A big lead? A situation where he can only fail?

“I don’t think I have anything to prove,” Spieth said. “I think I’ve already proven what we’re capable of doing when the pressure is on. … I don’t think there’s anything that will come up where I feel like I need to get revenge.

“As of right now, I’m ready to be out on the golf course, trying to work my way up the leaderboard, and trying to win The Players Championship.”

If they were gone: The Charlie Strong replacement

Episode 11 of On Second Thought: Should the Big 12 expand or dissolve?