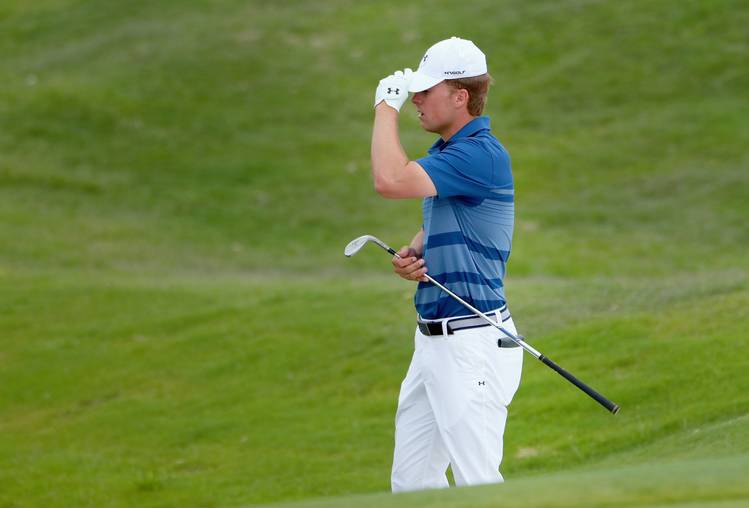 Jordan Spieth reacts to a chip on the fifth hole during the Final Round at AT&T Byron Nelson on May 22, 2016 in Irving, Texas. (Photo by Tom Pennington/Getty Images)

In today’s Golden’s Nuggets, Cedric touches on a Bevo-related item – the golf psyche of former Longhorn Jordan Spieth. Here’s what he had to say about him:

“Jordan Spieth didn’t close out the Nelson like we thought he would, but that clunker of a 74 shouldn’t discourage his fans from thinking he won’t have a career that comes somewhere close to Tiger but well short of Nicklaus.

The kid is 22 years old. That’s a friendly reminder. He will be around for the next 15-20 years minimum, and like most golfers, he will hit those dry spells that come with the most frustrating sport on the planet to play.

“I mean, you don’t go from the final group in second place alone and finish in 18th,” Spieth told reporters Sunday, “and there’s not many positives you’ll be able to take out of that other than the last hole I played, I made birdie. That’s nice.”

Funks happen for mortals, and Spieth is mortal as evidenced by that epic collapse at the Masters. Better yet, he’s able to be self-critical about his game, knowing there will be other tournaments to win.

The one thing that lets me know Spieth will be just fine: He keeps it even keel on the course and doesn’t let one bad performance lead to another. It’s the perfect mentality to take on to a golf course and the reason Spieth will rebound soon.

For the rest of Ced’s Nuggets, including his take on Draymond Green’s non-suspension and the Western Conference Finals, click here.

Texas freshman WR Collin Johnson is an insane athlete, and he can prove it