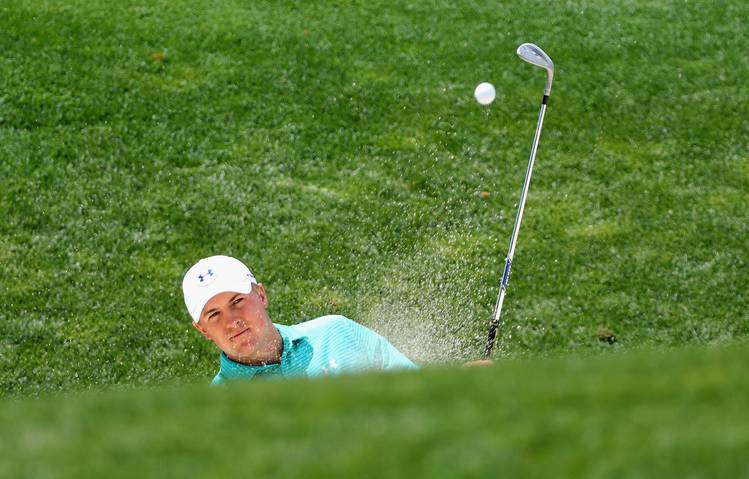 OAKMONT, PA - JUNE 13: Jordan Spieth of the United States plays his shot during a practice round prior to the U.S. Open at Oakmont Country Club on June 13, 2016 in Oakmont, Pennsylvania. (Photo by Sam Greenwood/Getty Images)

It wasn’t the speed of the greens or the rough that covered his shoes.

It was the sand in the bunkers.

Advertisement
“When I played it six weeks ago, there was very compact sand, and that meant that if the ball trickled into the sand, it wasn’t a bad shot,” Spieth said. “Just barely went into the sand, you could hit the green no problem (if) you hit a good, solid shot. They have dumped so much sand into these bunkers, and now it is so tough to get a clean strike on the ball.”

What really got his attention was the 17th hole during a practice round Monday. Rickie Fowler pulled his tee shot left and it didn’t carry the bunker. When they got to his ball, it was plugged in the sand, and Fowler couldn’t reach the green from about 40 yards.

“I really think it’s a bit of a shame they dumped all this sand into the bunkers,” he said. “I don’t think it was necessary.”

How much sand was added to the bunker — if any — was not entirely clear.

Oakmont superintendent John Zimmers said his crew “loosened the sand up” during the week before the U.S. Open to get it more uniform for play. Plus, rain was in the forecast.

“We did some maintenance. We did a little bit of work on them,” Zimmers said. “And then yesterday, it was one of the windiest days I can remember here at Oakmont — very, very unusual for us — and actually some of the sand was even blowing out of the bunkers. So when we got out this morning, the tops of the sand was very, very dry.”

RELATED COVERAGE: Jordan Spieth gets look at ‘hardest test’ during visit to Oakmont

RELATED COVERAGE: Golden: No worries on Jordan Spieth — that kid will be just fine

USGA executive director Mike Davis said the plan was to add some water to bunkers to make them more firm.

“We were just saying as we were going around this morning after the setup that the bunkers did need some moisture because the guys were having trouble raking it,” Davis said. “But it’s really just because we’re expecting more rain, and we really didn’t get any. So normal course of maintenance.”

The bunkers are an understated menace at Oakmont.

When Henry Fownes built the course in 1903, Davis said there were about 80 bunkers as part of the original design. Tales from Oakmont suggest that every time Fownes or his son, former U.S. Amateur champion William Fownes, saw someone hit over a bunker or some other favorable spot, they added a bunker.

Golden: Baylor has no leadership, bringing back Art Briles would be ‘catastrophic’