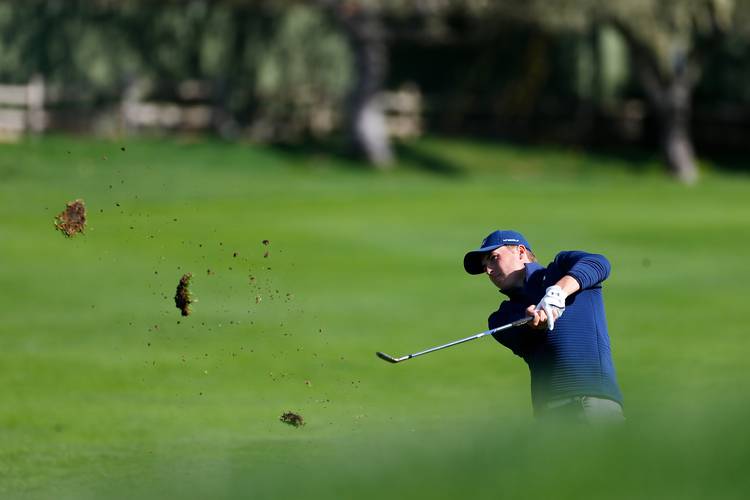 PEBBLE BEACH, CA - FEBRUARY 12: Jordan Spieth hits a shot on the 15th hole during the Final Round of the AT&T Pebble Beach Pro-Am at Pebble Beach Golf Links on February 12, 2017 in Pebble Beach, California. (Photo by Jonathan Ferrey/Getty Images)

PEBBLE BEACH, Calif. (AP) — Winning has come so quickly for Jordan Spieth that even at age 23, he wondered if he took it for granted.

He got some perspective from a victory Sunday at the AT&T Pebble Beach Pro-Am that was dull as it was dominant.

Few walks up the 18th hole are more enjoyable than Pebble Beach, especially with the sun gleaming off the Pacific and the sound of waves on the shore. It’s even better with a four-shot lead, with nothing left to do but hoist the trophy.

Spieth’s four-shot victory after closing with a 2-under 70 was the ninth of his PGA Tour career in 100 tournaments, making him the youngest player since Tiger Woods to claim that many titles.

“I remember walking up 18 today thinking to myself, ‘I don’t think that I’ve enjoyed the wins as much as I’ve talked to myself about the losses,'” Spieth said. “I don’t think I’ve really enjoyed on the inside how much it takes to win out here and the hard work that goes into winning.”

He sure made it look easy.

Spieth effectively won this tournament late Saturday afternoon, when he took only 10 putts on the back nine and closed with three birdies over his final four holes to build a six-shot lead.

He thought about Woods when he set out to play the final round.

Spieth was only 6 when Woods won the 2000 U.S. Open at Pebble Beach with a record 15-shot victory. Woods set a private goal of not making a bogey in the final round, and he wound up playing the final 26 holes without dropping a shot.

“I don’t remember watching it, but I remember watching highlights of Tiger trying to hold his bogey-free round when he had such a big lead,” Spieth said. “That was kind of his goal. That was mine today. Hey, let’s try and keep a clean card. … Played a lot of boring golf today, which is exactly what was needed.”

Spieth played his final 28 holes without a bogey, not as remarkable as what Woods did in U.S. Open conditions, but it did the trick.

No one had much of a chance.

Spieth putted for birdie on all but one hole. The one time he was in trouble, with a shot that went long of the 13th green, he hit a flop shot up to 5 feet and saved par. The other 17 holes, his longest two par putts were from 3 feet.

“He did exactly what he was supposed to do and played a great round of golf,” said Brandt Snedeker, a two-time Pebble winner who played in the final group with Spieth and shot 70 to finish fourth. “Sometimes those are the hardest rounds of golf, when you have the lead that he had. It was fun to watch him do his thing out there.”

Kelly Kraft, a former U.S. Amateur champion, was in the best position to apply a little pressure. He ran off four straight birdies on the front nine to get within four, made another birdie on No. 11 to get within three and didn’t make anything else the rest of the way.

This was Spieth’s day in the sun, and it felt sweet for a number of reasons.

He had not won on the PGA Tour since Colonial last May, and part of him wanted to get going before he arrived at Augusta National the first week in April. This was the first time Spieth had a 54-hole lead since the Masters last year, when he stretched a one-shot lead to five shots at the turn only to collapse around Amen Corner.

This was a clinic.

“I didn’t rely on the putter at all today,” Spieth said. “And to win that way is new for me, and it certainly kept some more hair on my head.”

Spieth didn’t move anywhere in the world ranking. He was at No. 6, but because he had fallen so far behind the top five, he stayed at No. 6. That figures to change over the next month during the latest battle for supremacy.

But his name, and the way he won with a combination of a reliable swing and his putting stroke, is sure to get attention.

The difference is that Spieth now has as one fewer PGA Tour victory as the other six combined.

All but Rahm will be at Riviera next week for the Genesis Open, the strongest field of the year. It’s harder than ever to win on the PGA Tour. That hasn’t stopped Spieth from piling up victories.

VIDEO: Remember when Kevin Durant returned to Austin in 2013?