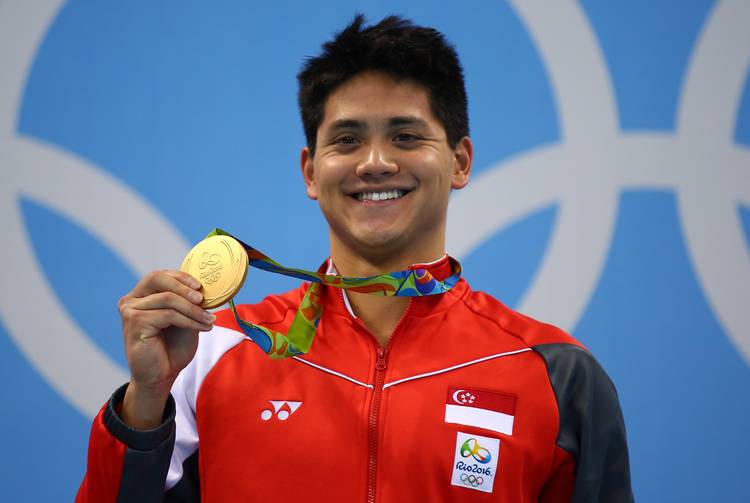 Joseph Schooling of Singapore celebrates winning the gold medal in the Men's 100m Butterfly Final on Day 7 of the Rio 2016 Olympic Games at the Olympic Aquatics Stadium on August 12, 2016 in Rio de Janeiro, Brazil. (Photo by Clive Rose/Getty Images)

Michael Phelps may be the greatest Olympic swimming champion ever. But Friday night, he got hooked by a Longhorn.

Texas sophomore Joseph Schooling posted the third-fastest time ever in the 100-meter butterfly and captured the gold medal in 50.39 seconds, just fractions ahead of Phelps, who was competing in the final individual event of his historic career.

“It hasn’t really sunk in yet,” Schooling said, according to the Associated Press. “I’m sorry if I don’t seem like I’m full of emotions right now. I don’t know what to believe, like, whether I actually did it or I’m still preparing for my race.”

Meanwhile, the national attention immediately focused on who finished second.

“Oh, I don’t know. Obviously I always want to be faster and want to be on the top of the medal podium,” Phelps said in an NBC interview immediately after he finished in a three-way tie for second in 51.14 seconds.

“Watching Joe and everything he’s done over the last two years, he’s been swimming great,” Phelps added. “A 50.3 is obviously a very good time, a very respectable time. My hat’s off to him.”

Phelps has been called “The King,” and Schooling has been referred to as “The Kid.” It was historic in more ways than just beating Phelps, though. Schooling, officially a member of the Singapore team, captured the first goal medal for his home country ever.

Schooling actually met Phelps for the first time in 2008 when the future Longhorn was a star-struck 13-year-old. Fast forward to Rio de Janeiro, Schooling snapped Phelps’ four-race gold medal winning streak and became an instant icon back home and in Austin.

2016: A legend (in the making) beats Phelps#Schooling #swimming #Rio2016 pic.twitter.com/ud3eCitRom

USA Today’s Steve Berkowitz tweeted that Schooling will receive a $740,000 prize from the Singapore Olympic Council. NCAA rules will allow Schooling to keep that money and maintain his amateur status to keep swimming at Texas.

TV viewers watching at home probably noticed a Longhorn tattoo on Schooling’s back.

Longhorns in the Olympics: Day 7