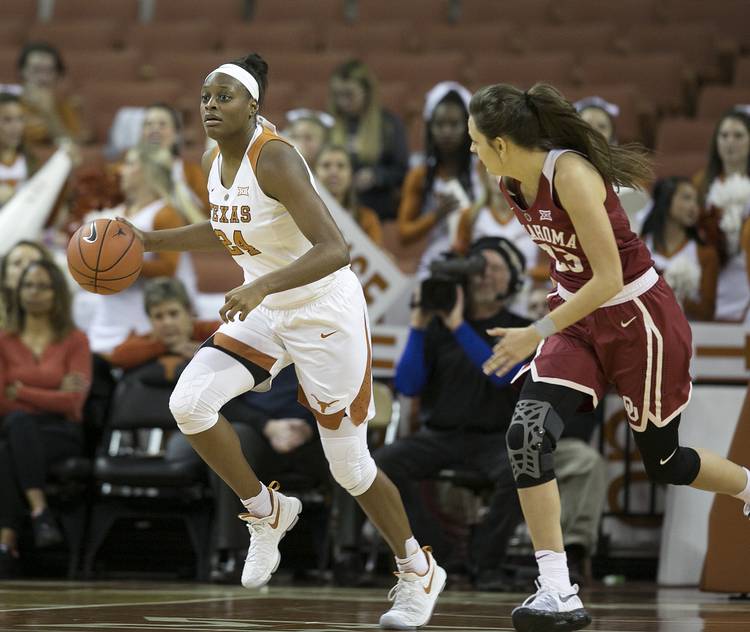 Texas's Joyner Holmes moves the ball past OU's Maddie Manning during the first half of their game at the Frank Erwin Center on Tuesday, January 17, 2017. DEBORAH CANNON / AMERICAN-STATESMAN

Texas guard Joyner Holmes has been named Big 12 Conference Freshman of the Week for two impressive performances last week in a pair of victories, the league office announced Monday.

Holmes averaged a double-double on the week with team-leading totals of 16.5 points per game and 12.5 rebounds per game. She also blocked 1.5 shots per game and shot 50 percent (13-of-26) from the field. Holmes turned in the third and fourth double-doubles of her young career this past week.

In the win against Oklahoma, Holmes charted a double-double with a game-high 20 points and 10 rebounds. It was the first 20-10 performance of her career. She also blocked two shots and shot 57 percent from the field in 34 minutes of action.

Against Texas Tech on Saturday in Lubbock, Holmes registered her second consecutive double-double with 13 points and a career-high 15 rebounds in 24 minutes.

The Longhorns return to action on Wednesday when play at TCU. Tipoff at Schollmaier Arena is 8 p.m. and the game will be televised by Fox Sports Southwest Plus.